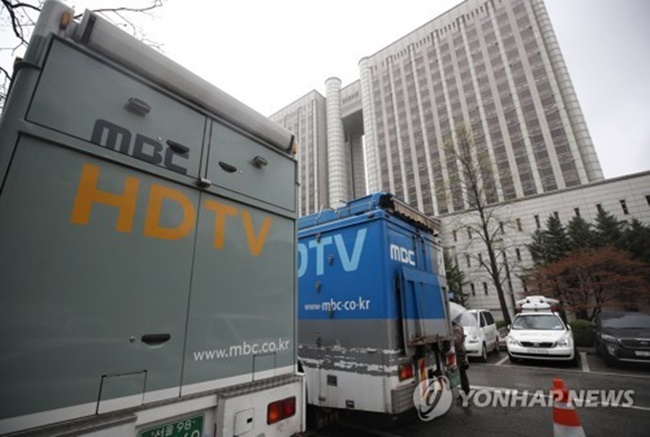 OB vans are stationed in a parking lot in front of the Seoul Central District Court on April 5, 2018, a day before the sentencing trial of former President Park Geun-hye accused of corruption and bribery. (Image: Yonhap)

SEOUL, April 5 (Korea Bizwire) – A Seoul court on Thursday turned down another injunction filed by former President Park Geun-hye against a court decision to allow the live broadcast of her sentencing hearing set for the following day.

The Seoul Central District Court dismissed the request, saying it does not constitute grounds for reconsideration.

This is the second injunction rejected by the court regarding the high-profile bribery and corruption trial of the ousted leader. On Wednesday, the court denied the fine injunction filed the previous day by one of Park’s private lawyers.

The latter injunction, sealed with Park’s own thumbprint, was filed by her public defense lawyer earlier in the day.

Park asked the court to put a limit on the televising of the trial, claiming that allowing full coverage is an infringement of her rights as a defendant and goes against the principle of the presumption of innocence.

With the court’s refusal on the injunction, the trial is expected to be aired live as scheduled. The court decided Tuesday to allow livebroadcasting of the sentencing, citing the significance of the case and public interest.

Park has been charged with bribery, abuse of power and a string of other irregularities related to a massive influence-peddling case that removed her from office last year. Prosecutors have demanded a 30-year jail term for her.