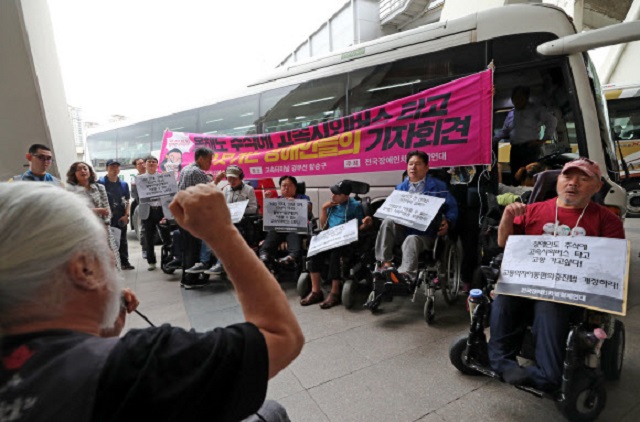 A group of activists stages a protest at Seoul Express Bus Terminal in southern Seoul on Sept. 12, 2019, demanding the government allocate more of its budget toward installing facilities for wheelchairs. (Yonhap)

SEOUL, April 2 (Korea Bizwire) — A recent court decision ruled that the seat structure designed for disabled persons in public buses, which obliges them sit sideways rather than facing forward, amounts to an act of discrimination.

The Supreme Court announced Thursday the conclusion of a lawsuit filed by a disabled person against a transportation company, ordering the firm to take corrective measures.

In December 2015, the plaintiff riding in a wheelchair boarded a two-story bus operated by the transportation company that was the focus of the lawsuit.

While the bus had a separate space reserved for disabled persons, it made them sit sideways, rather than facing forward.

The plaintiff claimed that he was subjected to an act of discrimination by having to sit alone sideways because the bus didn’t secure enough space, asking the company to pay 3 million won (US$2,660) in compensation and expand the seat space to allow disabled persons to sit facing forward.

A lower court ruled that sitting sideways could heighten the risk of accident if the bus made a sudden stop, and could inflict a sense of humiliation on the disabled persons by exposing their face to other passengers.

The court went along with the ruling, but ruled out compensation since the company did not intend to discriminate.