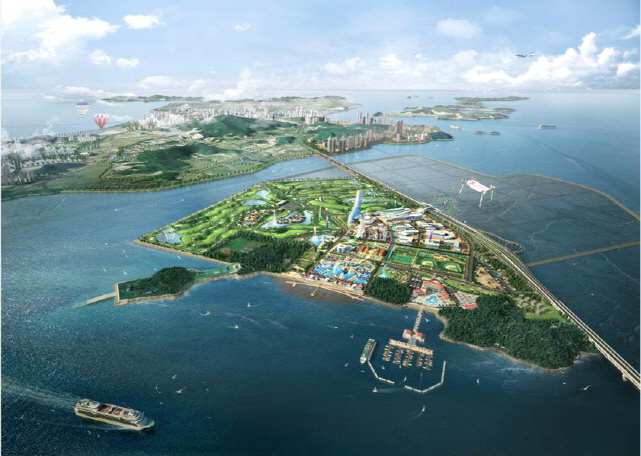 An aerial view of ‘Dream Island’ project. (image: Ministry of Oceans and Fisheries)

SEOUL, Jun. 24 (Korea Bizwire) — The “Dream Island” project, a large-scale tourism and leisure complex that will be built on reclaimed land within Yeongjong Island located in Incheon, appears to be nearing reality.

At Lotte Hotel in Seoul on Monday, the Ministry of Oceans and Fisheries held a briefing session on the start of the Dream Island project and a presentation on attracting investment.

The project is to develop a large-scale landfill site at Incheon Port into a world-class marine tourist attraction linked to Incheon International Airport.

It was the nation’s first port redevelopment project to start with a private proposal.

The construction began in March of this year after various licensing and other administrative procedures were completed, following an initial project proposal from 2012.

The project, which will see the investment of 2.32 trillion won (US$1.75 billion) in private capital by 2022, will house a golf course, a water park, a hotel and a complex shopping mall on 3.32 million square meters of land.

The ministry expects the project to create a production inducement effect of about 15 trillion won and create 18,000 jobs, which will also contribute to boosting the local economy.