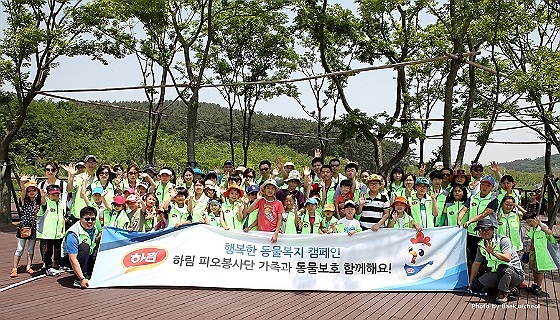 SEOUL, June 30 (Korea Bizwire) – As corporate social responsibility has rapidly gained wide acceptance as one of the corporate core duties, the current trend has evolved to involve participation from customers.

Such evolution has shifted the companies’ CSR style from making sporadic donations to take a step further to initiate social contribution programs which get their customers involved.

Harim, Korea’s major chicken processor and distributor, has recruited the first group of “Harim Pio Volunteer Family,” a volunteer group of family units of its customers. Starting from this one, from which others to follow, each group will conduct various volunteer works for three months, cooperating with the company’s employees and executives for animal protection and environment conservation.

In last May, the group of volunteering customers made “Effective Microorganism” balls which conducted natural purification of water, and rerouted them in contaminated rivers and streams.

The volunteering families are led by the CEO of the company himself and said that they will regularly participate in the protection of endangered species and preserving the environment, and actively take part in humanitarian aid programs as well.

An official in Harim said, “As a company that values ethical management, we have created a customer-affiliated volunteer program to provide ecology learning experiences for kids and families to have opportunities to get closer to the nature and learn true affection of it.”

Lotte Mart, Korea’s major discount outlet operator, has started recruiting for the “Happy Dream Customers’ Volunteer Group” on May 29 and has asked their customers to participate in the customer-affiliated philanthropic group work.

The retailer’s company-customer joint volunteers were recruited from its 20 stores and have conducted organized volunteer work for those who are in need, such as children’s care centers, the underprivileged and economically-challenged and small merchants in traditional markets.

7Eleven, a convenient store chain, recently handed 2 million won worth of collected coin donations from its customers to UNICEF Korea. The donations were collected from 3,800 stores and from the headquarters of the convenient chain, from August last year to April of this year. The charity will be used to aid poverty-stricken children around the world through UNICEF.

Shinhan Card has also initiated customer-affiliated CSR by collecting donated card points from its customers and opening a library for children in Mapo District of Seoul. The card company has requested customers to donate their credit card points, which often get overlooked and end up unused, through its own charity website “Areum-In.”

The library was built with the gathered card points, aggregated to almost worth 15 million won and its shelves were engraved with the names of the customers who have contributed so that the customers could receive a small recognition that they deserve for their good deed. Shinhan also looks to recruit “Book Mentors Volunteer Group,” mainly with college students, to be sent to the library and give guidance on reading to local children.

It looks like more and more of customer-affiliated CSR activities will be observed, which is good for our communities. This is because not only it fulfills CSR on behalf of corporations, but it is also a great way to build loyalty among the customers and spread philanthropy.