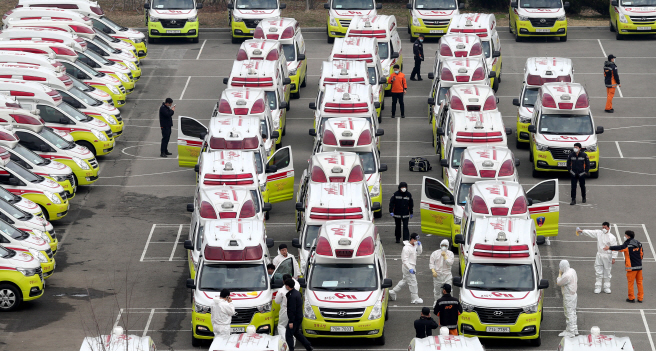 Ambulances are parked outside a water purification plant in Daegu on March 1, 2020, with emergency workers checking their vehicles. (Yonhap)

DAEGU, March 11 (Korea Bizwire) — A fire station in the southeastern city of Daegu said Thursday it has started to offer a translation service for foreign residents in the city, amid increasing calls for help from them.

According to the Suseong Fire Station, there are more than 28,000 registered foreign residents in the city, and the figure will go much higher when including short-term residents and travelers.

Last year, the city received a total of 586 reports from foreigners, with Chinese making up the biggest group followed by American and Vietnamese, and the Suseong Fire Station logged 53 calls.

Since this month, the station has run a 16-strong team that offers translation for nine languages 24/7 for non-native residents who are presumably in more dangerous situations in case of an emergency due to language barriers.

“We will do our best to prevent life-threatening occasions from happening to foreign residents because of language barriers,” Kwack Chul-ho from the team said.

“We expect the service to make our rescue operation quicker and more accurate, and foreign residents will be able to explain their predicaments in a more detailed manner,” Lee Kwang-sung, chief of the Suseong Fire Station, said.