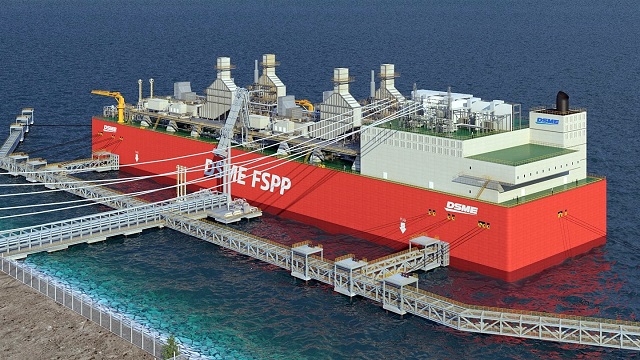 SEOUL, Oct. 26 (Korea Bizwire) — Daewoo Shipbuilding & Marine Engineering Co. said Monday that it has won approval for its floating facility to supply both electricity and LNG to an onshore facility, from ABS, a U.S. ship quality assurance and risk management company.

“The floating storage power plant and the LNG cargo handling system have separately been built and operating in the shipbuilding industry, but the combination of the two by Daewoo Shipbuilding marks the first in the industry,” Yoon Yohan, a company spokesman, told Yonhap News Agency.

The plant, 161 meters long, 60 meters wide and 33 meters high, can produce and supply a maximum of 200 megawatts of electricity by burning LNG.

It can also supply about 22,000 cubic meters of natural gas after storing and regasifying LNG transported by LNG bunkering ships, Daewoo Shipbuilding said.

A LNG bunkering ship can store LNG in tanks after cooling it to minus 163 C and directly supply it to LNG-powered ships on the ocean.

The facility will be helpful for developing countries that have difficulties in building large-sized power plants and lack energy supply infrastructure, the company said.