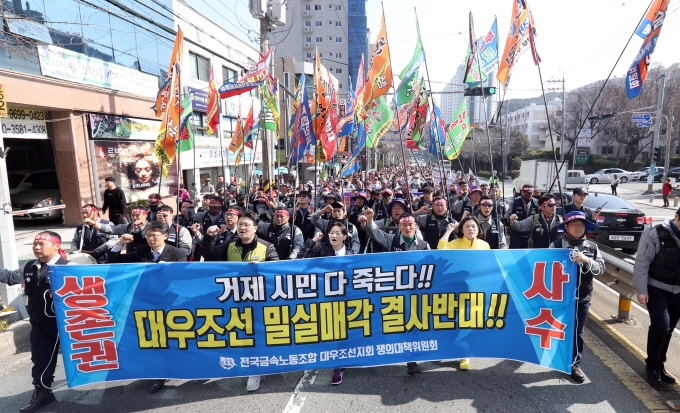 Unionists of Daewoo Shipbuilding & Marine Engineering Co. stage a demonstration in front of the Korea Development Bank in Seoul on Feb. 21, 2019, to protest the bank’s sale of the shipyard to Hyundai Heavy Industries Co. (Yonhap)

Last week, workers at Daewoo Shipbuilding approved a walkout against the proposed deal. The shipbuilder’s union said its workers at the Geoje yard in southern South Korea will lay down their tools for four hours in the afternoon.

Early this month, the state-run Korea Development Bank (KDB) said it would sign a formal deal with Hyundai Heavy early next month to sell its controlling stake in Daewoo Shipbuilding.

KDB is Daewoo Shipbuilding’s main creditor and has a 55.7 percent stake in the company.

The labor unions at Hyundai Heavy and Daewoo Shipbuilding fiercely oppose the deal, claiming it could lead to massive layoffs.

The passage of the vote by Hyundai union may result in workers from the two shipyards joining forces to thwart the purchase.

Lee Dong-gull, the chief of KDB, stressed that it is the right time to sell Daewoo Shipbuilding as the industry seems to be on a recovery track.

“This is the last chance to sell Daewoo Shipbuilding … we may have to wait another 20 years to see such a chance come again,” the banker said during a meeting with reporters.

There are some obstacles hindering the deal, such as Daewoo Shipbuilding workers’ opposition and regulatory approval by foreign authorities.

“But I see an over 50-percent chance for the deal,” he said.

If the takeover goes ahead as planned, the South Korean shipbuilding industry is expected to be dominated by two major shipbuilders — Hyundai Heavy and Samsung Heavy.

South Korean shipbuilders, once a cornerstone of the country’s economic growth and job creation, have been reeling from mounting losses in the past few years, caused by an industrywide slump and a glut of vessels amid tough competition from Chinese rivals.

The government has been hoping that the local shipbuilding industry can be overhauled in such a way that two major players can dominate the sector to better compete against Chinese rivals and tackle sectoral market fluctuations.