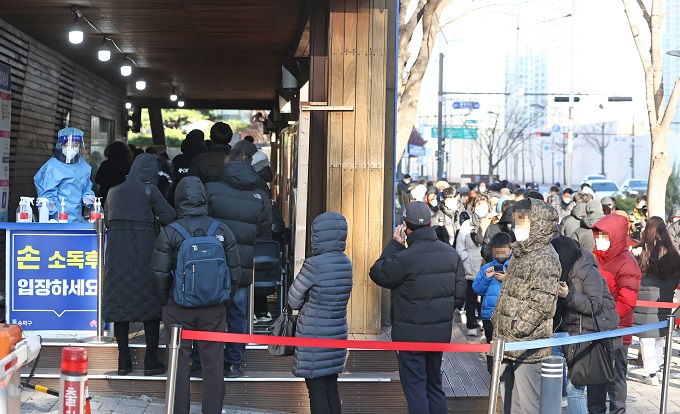 Citizens wait in line to receive COVID-19 tests at a state-run medical center in southern Seoul on Nov. 28, 2021. (Yonhap)

The country reported 3,928 new COVID-19 cases, including 3,893 local infections, raising the total caseload to 440,896, according to the Korea Disease Control and Prevention Agency (KDCA).

The tally was down from 4,068 on Saturday but higher than 3,901 on Friday. The country reported the highest daily infections of 4,115 on Wednesday.

The decline was largely attributable to less testing over the weekend.

South Korea’s quarantine efforts stand at a critical juncture as it has seen a surge in COVID-19 related deaths and critically ill patients since it began easing virus restrictions on Nov. 1 under its three-phase “living with COVID-19″ scheme.

The country added a daily record high of 56 more deaths from COVID-19 on Sunday, raising the death toll to 3,548. The fatality rate stood at 0.8 percent.

Of the 647 seriously ill patients, those aged 60 and older accounted for 84.5 percent, the KDCA said. Breakthrough cases shot up at senior care hospitals and nursing homes as vaccination efficacy has diminished for those who received shots earlier this year.

Surging infections and critical cases have quickly depleted available hospital beds across the nation. Of the 714 beds secured for intensive care in the greater Seoul area, 85.4 percent were occupied as of 5 p.m. Saturday.

Through 9 p.m. on Sunday, South Korea had confirmed 2,776 additional cases, down by 408 from the previous day. The figure does not include that from Busan, which stopped releasing real-time data on Nov. 1.

Cases are tallied until midnight and announced the following morning. Numbers typically drop over the weekend due to fewer tests and bounce back up during the week.

Health authorities remained on alert over a possible further surge in virus cases during the winter season and the impact of the emergence of the new omicron variant. The World Health Organization recently designated omicron as a variant of concern. 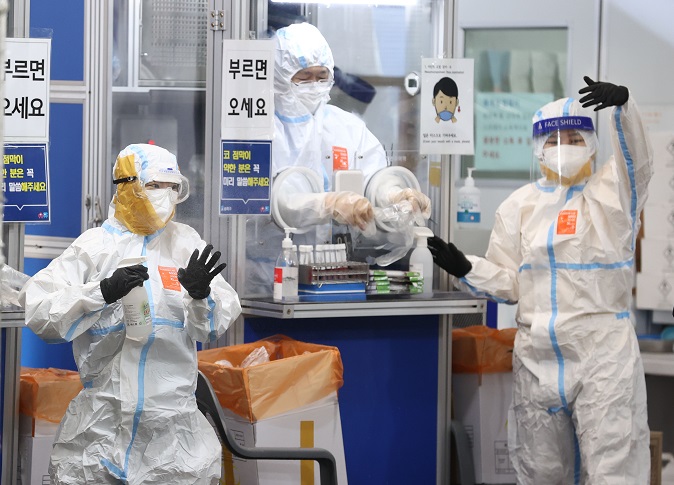 South Korea planned to move to the second, more eased stage in mid-December, but health authorities have warned the country may not be able to do so if the current virus trend continues.

The government plans to unveil a set of quarantine measures Monday to tackle the spike in COVID-19 cases.

Health authorities are considering setting the period of the validity of vaccination passports to six months in a bid to encourage people to receive booster shots later.

To use high-risk or multipurpose facilities, those aged 18 and younger could be required to have a vaccination passport, which proves a person has been fully vaccinated against COVID-19.

Unvaccinated people may also have to shoulder treatment costs if they are infected with the virus. Currently, the government provides all treatment costs for COVID-19 patients.

On Sunday, South Korea imposed an entry ban on all foreign arrivals from eight African countries in a bid to block the inflow of the potentially more transmissible omicron variant.

South Korean nationals from those countries are required to be put in a 10-day mandatory quarantine at facilities regardless of whether they have received COVID-19 vaccines.

“Health authorities will continue to monitor the risks of the omicron variant and consider expanding a list of countries subject to tougher quarantine rules,” the KDCA said.

Officials said eight South Koreans arrived back home on Sunday from the eight African countries on the banned list — four from Zimbabwe, three from Mozambique and one from South Africa — and none tested positive for the omicron variant.

Over the past five weeks, 22 South Koreans have returned home from Africa, and 14 have tested positive for the delta variant.