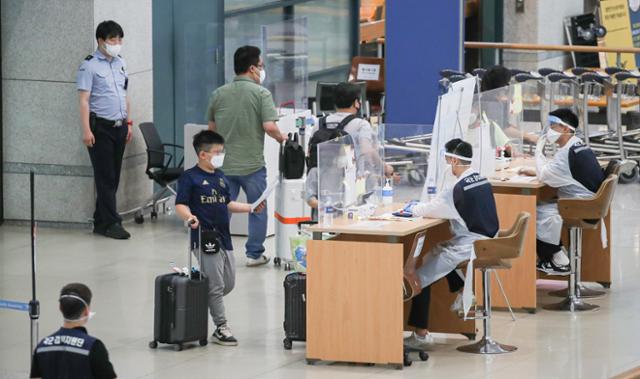 This photo shows an arrival gate at Incheon International Airport, west of Seoul, on June 28, 2021, amid the global spread of coronavirus variants. The country reported 595 new cases the same day, including 35 from abroad. (Yonhap)

As of 9 p.m., 756 additional cases were confirmed nationwide, up 214 from the same time the day earlier, according to health authorities and local governments.

Among them, 372 infections were found in Seoul, the highest figure this year, with three more hours to go before the end of the day. The previous daily high of 329 was posted on Jan. 3.

On Tuesday morning, the Korea Disease Control and Prevention Agency (KDCA) announced that 595 coronavirus cases had been confirmed throughout the previous day.

Daily cases in the nation are compiled until midnight and made public the following morning.

The significant hike in infections added to concerns about the impact of relaxed social distancing rules to take effect later this week.

The government has decided to implement a set of revamped distancing rules starting in July, with the country’s vaccination program gathering pace.

Under the loosened rules, restaurants and cafes will be allowed to open till midnight from the current 10 p.m., and bars and other nightlife facilities will also resume their operations.

The ban on gatherings of five or more people is to be lifted to six people until July 14 in the capital area before the limit will be extended to eight.

No restrictions will be placed on other areas after the first two weeks of next month.

The eased rules will be put into place as a rising number of variant cases are threatening the country’s virus fight.

Ahead of the implementation of the eased rules, health experts expressed concerns over the possible surge in new cases, as people in their 20s to 50s have yet to be inoculated amid a steady rise in new variant cases.

To contain the spread of the virus in the greater Seoul area, virus-prone facilities in the area will be under enhanced scrutiny for two weeks till July 14, including zero-tolerance against violators, amid eased social distancing measures. 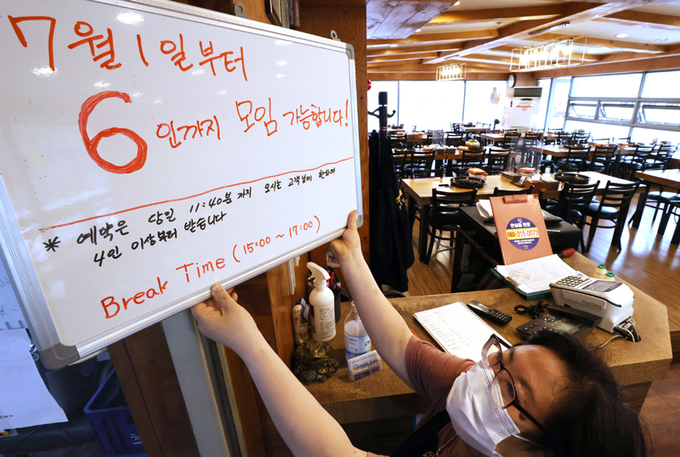 An employee puts up a sign at a restaurant in Seoul on June 28, 2021, to inform customers that gatherings of up to six people are allowed starting July 1 under the eased social distancing rules amid the coronavirus pandemic. Under the new Level 2 distancing, the ban on gatherings of five or more people will be eased to six people until July 14 in the greater Seoul area after which the ceiling will go up to eight. (Yonhap)

Health officials said they have been tracking the infection routes of confirmed cases of the super-contagious Delta strain from India as the spread of the variant started to proliferate in the greater Seoul area.

A total of 15.30 million people, or 29.8 percent of the country’s 51.3 million population, have received their first shots of COVID-19 vaccines since the country started its vaccination program on Feb. 26.

The KDCA said 4.76 million people have been fully vaccinated, taking up 9.3 percent of the overall population.

As of midnight, the country had a total of 1,557,100 doses of vaccines, according to the health authorities.

South Korea is trying to inoculate 36 million people by September to achieve herd immunity in November, but it hopes it can reach the goal earlier than expected with the increased vaccine rollout.

Health authorities advised people who feel chest pains and pressure and have respiratory difficulties after inoculation with vaccines such as those by Pfizer and Moderna to get medical treatment.

If they are diagnosed with heart diseases, like myocarditis and pericarditis, after diagnostic examinations, they will receive medication treatment or operations.

Of the newly confirmed domestic cases, the capital area accounted for 75 percent, with 201 from Seoul, 228 from Gyeonggi Province and 17 from Incheon, 40 kilometers west of the capital.

There were 35 additional imported cases, up five from a day earlier, raising the total to 9,882.

Of the newly confirmed cases from overseas, 18 came from Indonesia, followed by Russia with four.

The health authorities said arrivals from India, Indonesia, Pakistan and the Philippines will not be allowed to skip a mandatory 14-day quarantine even if they are vaccinated, to keep the global spread of the highly contagious Delta variant in check.

The country earlier announced its plan to allow arrivals who have been vaccinated abroad to enter South Korea without going through self-isolation starting next month.

The number of patients in serious or critical condition came to 152, up 11 from the previous day.

The total number of people released from quarantine after making full recoveries was 147,077, up 402 from a day earlier, with 7,073 people being isolated for COVID-19 treatment.