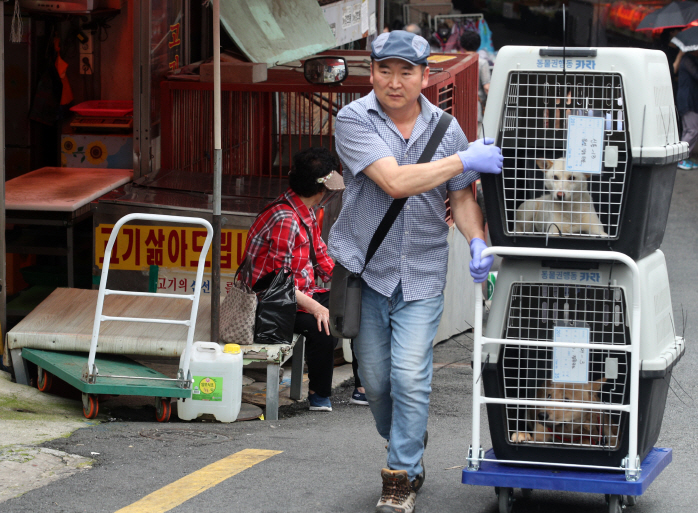 Gupo Dog Meat Market was shut down by mutual agreement, and most of the dogs that used to be locked up in the market were sent out for adoption to find new families through animal agencies. (Yonhap)

For the last 30 years, the closure of the Gupo Dog Meat Market has been a popular topic of discussion. The market, however, managed to survive due to strong opposition from store owners.

Busan’s Buk District went through an organizational overhaul in August 2018 to resolve the prolonged dispute, establishing a new Animal Protection Team to make better efforts to shut down the market.

At first, the team sought to follow the traditional method by cracking down on illegal acts committed by the store owners to take down the market.

However, the team soon decided otherwise and chose to listen to the complaints from the local merchants, which turned out to be a path towards finding a fundamental solution.

“The local store owners said that they were willing to move to a different job as long as their livelihood was secured,” said Lee Jeong-hee, head of the Animal Protection Team.

“Through the conversation, we realized that there needs to be an alternative solution to coexist with the merchants.”

Buk District, jointly with the city of Busan, decided to build a public parking lot and a rest area for local residents near the market, and allow former dog store owners to set up new businesses there.

Problems ensued, however, as there were no mechanisms to secure the welfare of the merchants until the construction of the new parking lot was complete and the merchants moved on to start new businesses.

As a response, the district passed a special ordinance earlier this year to provide temporary financial support to the merchants until they successfully move on to new businesses.

Animal protection agencies lauded the local authorities as Gupo Dog Meat Market was shut down based on mutual agreement, instead of forced measures like when dog slaughterhouses in the Seoul’s Gyeongdong Market and Seongnam’s Moran Market were shuttered.

The slaughterhouses in both markets were shut down by force, and dog meat sales continued even after the closure.

In contrast, Gupo Dog Meat Market was shut down by mutual agreement, and most of the dogs that used to be locked up in the market were sent out for adoption to find new families through animal agencies.

Once a place filled with 60 years of frenzied howling and barking, the Gupo Dog Meat Market will now turn into a public parking lot, and a welcoming space for animals.

Buk District is considering various renovation plans for the location, including a new cultural square for local residents, a playground for pets, an animal welfare facility, and a dog market history museum.

“Gupo Dog Meat Market will now get rid of its old reputation of being a center for animal abuse, and turn into a place where animal lovers and pets can come to make fond memories,” said Lee.