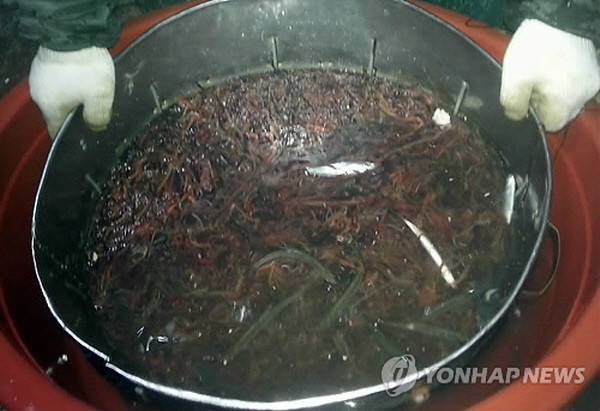 Ribbon worms have been reappearing since the end of March, resulting in the collective death of grass eels. (image: Yonhap)

SEOUL, Apr. 17 (Korea Bizwire) — Harmful worms that have returned to the Han River, killing grass eels and damaging the fishing industry might be a new species of ribbon worm, according to a statement from the Ministry of Environment on April 16.

Ribbon worms once appeared in the river back in 2013, and were accused of killing grass eels, which many fishers rely on. Some species of ribbon worms are known to be quite predatory, paralyzing fish by releasing toxins in water.

Ribbon worms have been reappearing since the end of March, resulting in the collective death of grass eels. Ministry officials sent images of the problematic ribbon worms to Professor Kajiwara at Hokkaido University in Japan, a prominent biosystematics researcher, for further analysis, and received confirmation that the ribbon worms in the images are not similar to any species verified to this day.

The ministry is currently undertaking a DNA sequence analysis on the ribbon worms with results expected by the end of April.

A group of governmental investigators will conduct a study on the ribbon worms to identify their population size, their effect on the environment and their habitation types. The group will also prepare measures to compensate fishers working on the Han River.