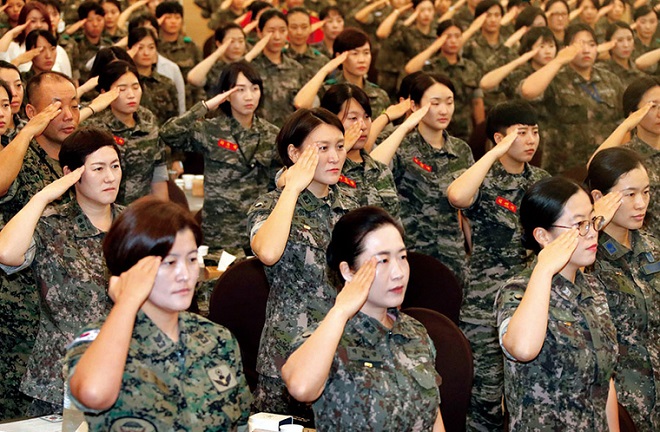 Female soldiers salute the national flag during a ceremony in Seoul on Sept. 6, 2017, to mark 67th anniversary of the establishment of South Korea’s Women’s Army Corps. (Yonhap)

SEOUL, Oct. 30 (Korea Bizwire) — A long-standing debate over South Korean women participating in mandatory military service has rekindled following anticipation that the military will face a lack of personnel in 10 years due to the decreasing national population.

The country should consider enlisting women for the military, experts argue, if it intends to maintain mandatory military service.

For years, there have been constant calls for women to join men in mandatory military service.

The Supreme Court, however, turned down three constitutional appeals in the past that argued the Military Service Act infringes upon the right of equality by imposing mandatory military duties only on men.

In 2014, the court judged that “women would not be able to reside in a military base or undertake military training for a certain period of time due to physiological differences and pregnancy.”

Nevertheless, the controversy over the issue continues in a heated public debate.

The state-run broadcaster KBS recently conducted a survey of 1,000 men and women asking if they would support the introduction of mandatory military service for women. A bit more than half of the respondents agreed, while 35.4 percent did not.

Experts argue that mandatory military service for women would entail a plethora of problems, including how they would live in the barracks.

“The idea will become more realistic only if the military takes measures to adequately ensure gender equality, and create new positions that address newer forms of combat,” said Cha Doo-hyeon, a researcher at the Asan Institute for Policy Studies.

They also argue that the issue should not merely be treated as an issue about gender equality or gender dispute.

“The discussion should focus on the structure of the military itself, rather than make it a dispute over gender,” said Kim Elli, an adjunct professor at Sungkonghoe University.