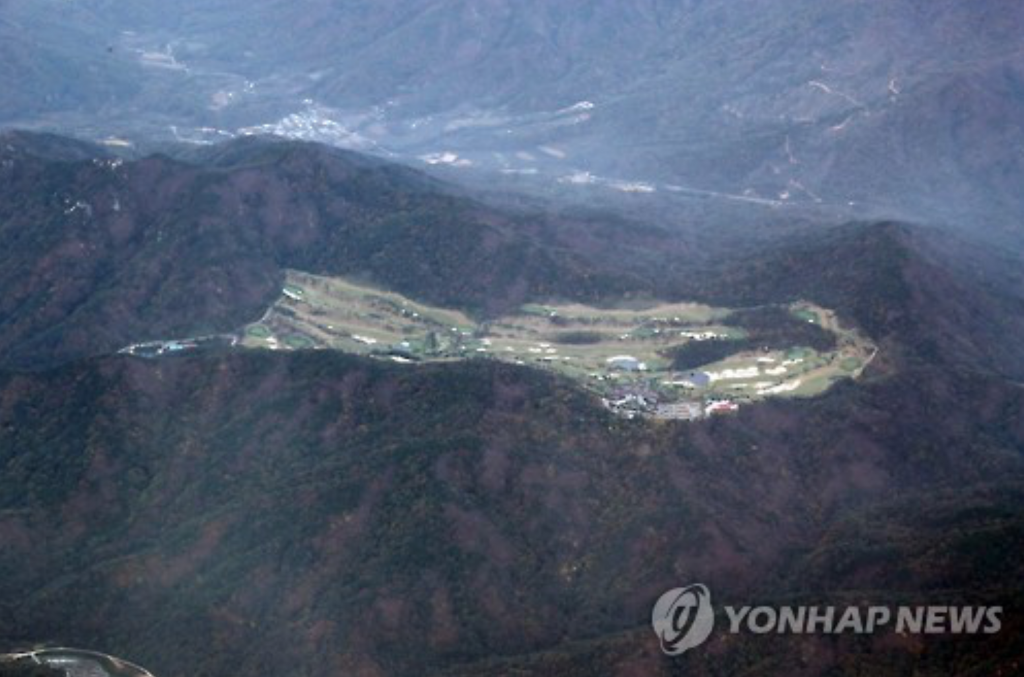 This bird’s eye view, taken on Oct. 27, 2016, shows the Lotte Skyhill Country Club in Seongju, chosen as the final site for a THAAD battery, instead of an anti-aircraft missile base in the same county. (image: Yonhap)

The Ministry of National Defense has tentatively agreed to secure the Lotte Skyhill Country Club in the southeastern rural county of Seongju from the nation’s fifth-largest conglomerate. The ministry suggested giving state-owned land near Seoul to Lotte in exchange for the golf course, a military official told Yonhap News Agency.

“Lotte is now giving final consideration to our suggestion. We expect Lotte to come up with a decision today or tomorrow,” the military official said, asking not to be named.

In a text message sent Tuesday afternoon, the defense ministry said it will deliver a briefing on the consultations process on Wednesday to acquire the final site for the Terminal High Altitude Area Defense (THAAD) system and other follow-up measures.

The ministry has been in talks with Lotte since early October after selecting the Lotte golf club as the final site for THAAD a month earlier, instead of the controversial Seongsan anti-aircraft missile base in the same county 296 kilometers southeast of Seoul.

Once the agreement is reached, an appraisal of the value of the two sites will be conducted. If the results show any considerable gap between the two, additional steps will be taken, the official said.

The ministry plans to deliver the golf course to U.S. Forces Korea following the closure of the swap deal under the Status of Forces Agreement (SOFA) signed between Seoul and Washington. The construction planning and evaluation of the THAAD battery’s environmental impact will then be carried out, he added.

Through close consultations with the new U.S. government, the Seoul government aims to deploy THAAD next year as scheduled.

In a seminar held early this month, USFK Commander Gen. Vincent K. Brooks said, “You’re gonna see the deployment of a THAAD battery. This is an alliance decision. It will come in the next eight to 10 months. That is an Army unit and … a larger configuration than the one in Guam.”

In July, the South and the U.S. announced a decision to deploy the THAAD system in South Korea to better defend against the North’s nuclear and missile threats. The rogue regime conducted two nuclear tests and launched about 20 missiles this year alone.

The initial decision to pick the Seongsan missile base as the site of the anti-missile system fell through due to strong objections by local residents living near the base. They claimed the system’s powerful X-band radar would pose serious health risks despite government-led test results showing that the radar doesn’t pose any health problems to nearby residents.

THAAD, a core part of America’s multilayered missile defense program, is designed to intercept incoming ballistic missiles at altitudes of 40 to 150 km during the terminal phase of flight after detecting the missiles with a land-based radar system.