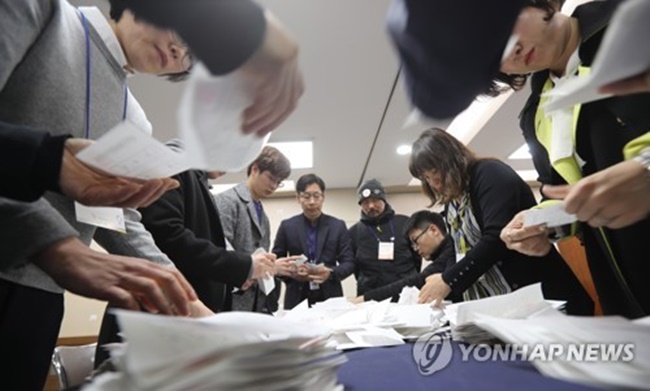 Officials from the liberal Democratic Party and the National Election Commission count ballots cast in a vote on March 22, 2017 as part of a primary election of the country’s largest political party to name its candidate for the upcoming presidential election. (Image: Yonhap)

SEOUL, March 23 (Korea Bizwire) – The liberal Democratic Party on Thursday launched an investigation into a possible leak of information on the outcome of a poll that will make up a part of its in-house election to name its presidential candidate.

The move came one day after the party held a one-day polling of its electorate as part of its primary election for the May 9 presidential vote.

The party earlier said the outcome of Wednesday’s vote will not be revealed immediately and instead be combined with telephone surveys and additional votes to be held later.

But many text messages suggesting one of four contenders for the party nomination swamped the nation shortly after the polling ended.

The outcome of the vote, or its possible leak, may not have any serious impact on the outcome of the entire primary process that is expected to involve more than 2 million citizens and party members.

Still, those said to be lagging in the race reacted angrily, noting such texts, whether true or not, may help further boost the popularity of the one said to be leading the race.’