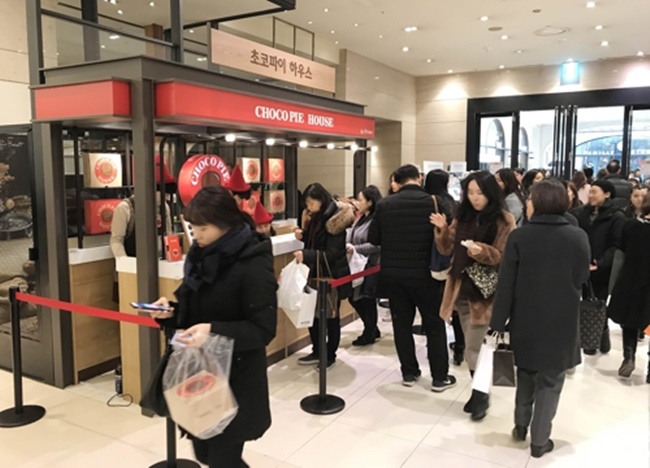 The South Korean dessert industry in 2016 reached 9 trillion won, accounting for 10 percent of the dining industry, according to sources close to the food industry and the Ministry of Agriculture, Food and Rural Affairs. (Image: Orion)

The South Korean dessert industry in 2016 reached 9 trillion won, accounting for 10 percent of the dining industry, according to sources close to the food industry and the Ministry of Agriculture, Food and Rural Affairs.

A number of food companies are rushing to cash in on the trend, with Orion having launched the Choco Pie House last year, a venue dedicated to its famous Orion Choco Pie product.

The premium Choco Pie, which uses pure cacao butter, has proven a success among young people who use social media, with more than 200,000 sold.

“All Choco Pie products are sold out almost every day. We are looking to develop new menu items and increase the number of new stores to reach more customers,” an Orion official said.

In the meantime, fast food is losing popularity, with McDonald’s shuttering a number of locations within Seoul, with further plans to close dozens of stores including one in Insadong.

Currently, there are around 100 McDonald’s stores in Seoul, down from 122 in 2016, with other fast food chains like Burger King and KFC also losing ground.

Experts say a number of issues including growing health awareness among young people are denting the popularity of fast food.

“Fast foods enjoyed their heyday as they allowed people to have a quick meal alone, but they are now dwindling along with family restaurants. On the other hand, the dessert industry is becoming more diverse and high-end, entering a new boom.