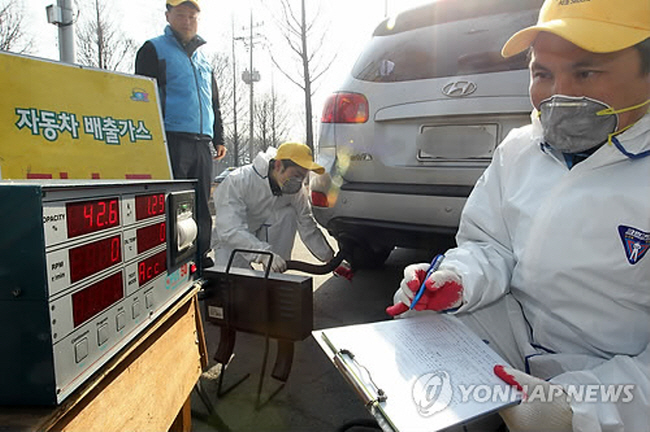 From 2016, vehicles over 3.5 tons will be subject to a 0.8ｇ/㎾h emissions standard under normal driving conditions. (image: Yonhap)

SEJONG, Jun. 12 (Korea Bizwire) — The Korean government has set a new regulation on emissions standards for diesel cars, in which the amount of greenhouse gases emitted during casual driving will also be considered along with the amount of gases emitted under pre-set driving conditions, since diesel cars are known to emit more nitrogen oxide exhaust during normal driving than under the pre-set conditions.

The new regulation will be applied to vehicles gradually starting next year. From 2016, vehicles over 3.5 tons will be subject to a 0.8ｇ/㎾h emissions standard under normal driving conditions.

The emissions standard will be fortified to 0.6ｇ/㎾h from 2017.

According to the Ministry of the Environment on June 11, the current emissions standards for diesel cars only apply to the amount of gases emitted under conditions such as driving at speeds between 0 and 120㎞/h with the air-conditioning turned off.

Gasoline and LPG car emissions are reported to be no different under pre-set conditions or normal driving conditions.

However, diesel cars are reported to emit 9.6 times more nitrogen oxide under normal driving conditions than the pre-set conditions.

A ministry individual said that such emissions could be significant, as drivers usually accelerate and decelerate frequently with the air-conditioning on.