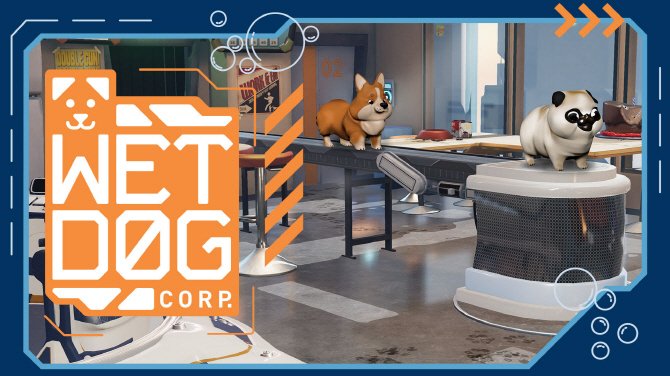 Austin, TX & Sarasota, FL, April 28 (Korea Bizwire) — Today, Ringling College of Art and Design with Flight School Studio announced that the first student game from their virtual reality educational partnership, Wet Dog Corp., will come to Steam on May 4. Mentored by the award-winning team at Flight School, students from Ringling’s newly-founded Virtual Reality (VR) Development BFA degree program created the game while learning the essentials of pre-production, asset creation, and game design. The game will be a free-to-download release. Students involved on the project include AJ Mize, Cain Hopkins, and Makayla Hensley.

Wet Dog Corp. is a simulator-style game set within a megacorporation that pays you to wash dogs. Players race against the clock and clean up mucky pups. Dirty dogs roll in and it’s your job to wash them down, get them dry, and send them back out into the world. It’s a simple task… until it’s not. With 13 types of dogs, eight levels, and three washing tools, the game was designed entirely by students who paired up with Flight School to gain insights on the game development process and understand the complexities of developing games for VR.

“This is an exciting partnership for our team at Flight School because we can shape the VR and game industry’s future talent,” explained Brandon Oldenburg, Flight School Studio CCO. “Even better, our team is endlessly inspired by the students’ ambitions and that makes any crew stronger and more innovative. It’s a true win-win for both Ringling and our team, many of whom are Ringling alumni.”

Additionally, a new cohort of students at Ringling began development on a second VR game under the guidance of Flight School’s leadership earlier this year. Glitch Out VR, previously slated for a beta debut at SXSW Gaming, is being developed remotely by the students, due to coronavirus-related campus closures and the cancellation of SXSW.

“There is no better way to learn than to actually have some skin in the game,” said Morgan Woolverton, interim department head of Ringling College’s Game Art and Virtual Reality Development programs. “When the students originally committed to the idea of making a product that would ship, they understood that this was an education on steroids. It is a unique educational experience to say the least.”

About Ringling College of Art and Design

Since 1931, creatives from every corner of the world have come to Ringling College of Art and Design to deepen, transform, and explore their passions. Our nearly 1,700 students are fueled by a need to create and we deliver the tools to turn passion into profession: an award-winning faculty, cutting-edge technology, and a supportive, creative community.

We offer the BFA in eleven disciplines and the BA in two. Beyond our rigorous curriculum—pairing studio and liberal arts—we excel in propelling students outside of the classroom through client projects, substantive internships, and national competitions, stopping at nothing to shape our students into tomorrow’s leaders of art and design. www.ringling.edu

Ringling College of Art and Design

Source: Ringling College of Art and Design via GLOBE NEWSWIRE