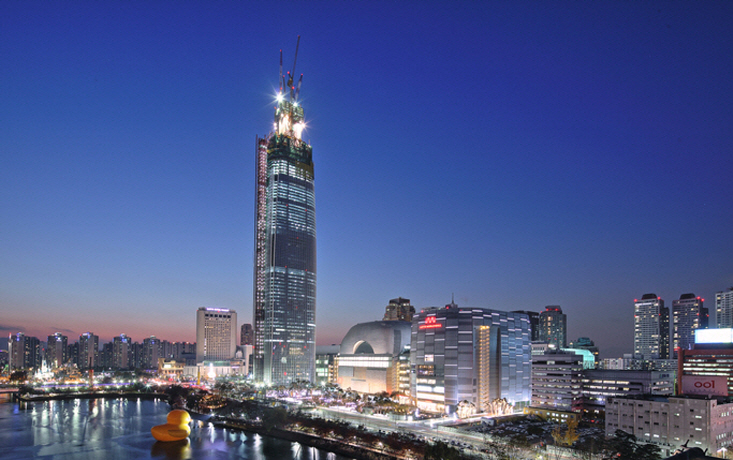 Visitor numbers have recently halved compared to a year earlier, when some 100,000 people visited the tower each day following its opening. (image: Lotte Group)

SEOUL, May 8 (Korea Bizwire) — South Korean retail giant Lotte Group said Friday it plans to reopen its namesake skyscraper next week, about five months after the Seoul city government ordered its shutdown when a string of accidents stoked safety fears.

The plan comes on the heels of an announcement by the city government that lifted the usage ban on Lotte World Mall’s aquarium and movie theater upon consulting with industry and government officials. The municipal government also scrapped a construction ban on its concert hall.

Public jitters over leaks at the aquarium and reported vibrations in the movie theater prompted the city government in December to activate a partial ban of the tower in southern Seoul, which will likely become the country’s tallest structure at 555 meters when completed in 2016.’

“A thorough management plan that factors in chances of additional safety accidents, is essential as public anxiety lingers despite (results that found) no problem in structural safety,” said Jin Hee-seon, who oversees the city’s housing and construction policy.

Lotte Corp., a group affiliate that manages the tower, welcomed the move and announced plans to reopen the facilities next week following a three-day free admission promotion for selected visitors.

“We plan to put our heart and soul into creating a cultural venue and a safety landmark that Seoul citizens can be proud of,” company president Noh Byung-yong said in a statement.

The Lotte affiliate forecast that lifting the ban, which had been a major drag on its profitability, will attract an additional 20,000-30,000 visitors to the high-rise.

Visitor numbers have recently halved compared to a year earlier, when some 100,000 people visited the tower each day following its opening, the company said.