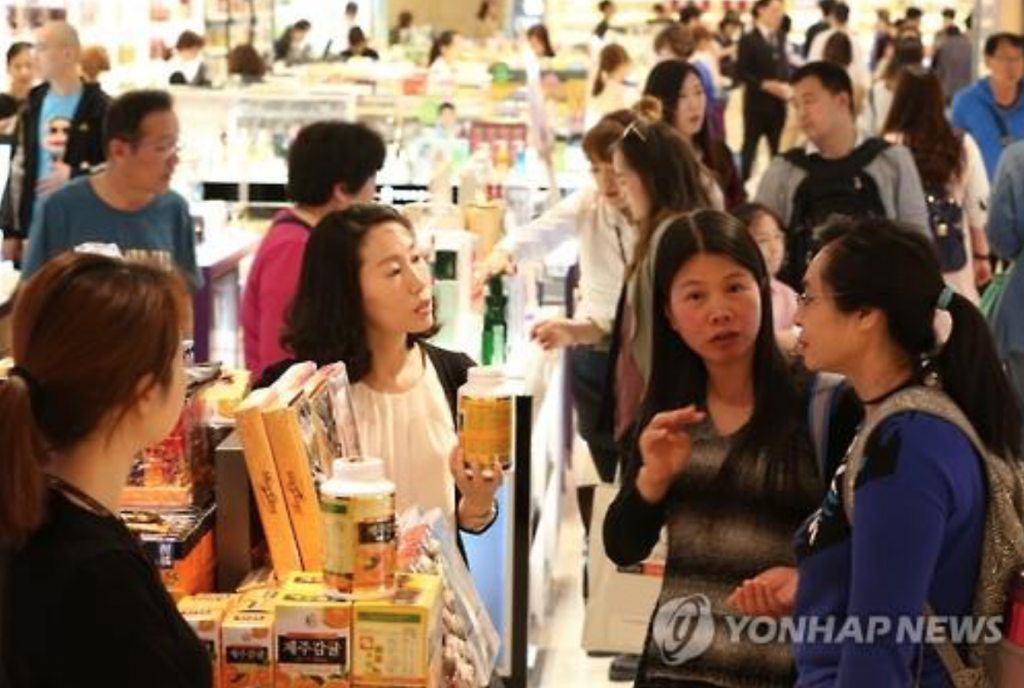 SEOUL, July 13 (Korea Bizwire) – South Korea’s distribution industry has become heavily dependent on China for its profits, statistics indicated Wednesday, making them vulnerable to even political and social issues that can turn away consumers from the Asian neighbor.

For Lotte Duty Free stores in Seoul, Chinese tourists accounted for 78 percent of its total sales for the January-June period this year, setting a new record. For all stores, 70 percent of the sales during the period were owed to Chinese shoppers, up from 59 percent in 2014 and 62 percent in 2015.

Likewise, Chinese consumers accounted for 80 percent of the sales at the main Shilla Duty Free store in downtown Seoul during the first half of the year. In total sales, 65 percent were from Chinese shoppers.

The dependence on the particular group was also heavy for hotels. Officials at Lotte Hotel said 1 out of 4 customers for luxury rooms at its central Seoul facility were from China. For Hotel Shilla, 2 out of 10 rooms at its mainstay hotel in downtown Seoul were occupied by Chinese people.

Numbers from Statistics Korea show China also influences the success of online sales by South Korean retailers. South Korean distributors sold 1.19 trillion won (US$1.04 billion) worth of goods through online shopping sites set up abroad last year, up 82.2 percent from the year before, and China made up for 68 percent of the figure with 810.6 billion won.

Department stores have been comparatively slow in attracting Chinese customers, but they are catching up. Sales tracked to Chinese shoppers increased 60.7 percent in the first half of the year from a year before for Lotte Department Store, according to company officials.

Industry officials say such heavy reliance makes South Korean companies extra sensitive to the tendencies of Chinese people. Their latest concern, officials say, is how Chinese tourists will react to the decision to deploy a U.S. missile defense system in South Korea.

“We can’t be complacent,” an official from a Seoul duty-free store said, referring to past instances when escalating territorial confrontation with Japan over Dokdo, South Korea-controlled islets in the East Sea, had slashed the number of Japanese visitors, and when an outbreak of the Middle East Respiratory Syndrome led to a big drop in the number of Chinese tourists.

“If anti-Korea sentiment grows in the Chinese government and among the people, our distribution industry is bound to face a crisis,” he said.