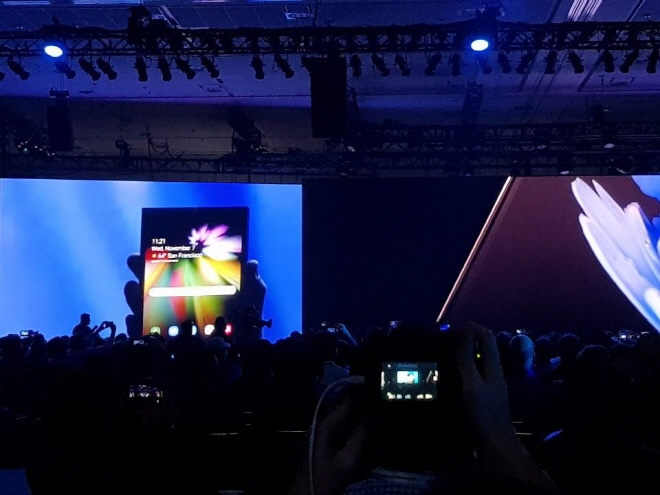 SAN FRANCISCO, Nov. 8 (Korea Bizwire) — Samsung Electronics Co. on Wednesday showcased its upcoming smartphone with a foldable display slated to be released in the early part of 2019.

At the Samsung Developer Conference 2018 held in San Francisco, the South Korean tech giant outlined some specs of its much-anticipated Infinity Flex Display technology, calling it the next big breakthrough.

The infinity display is expected to be employed on the company’s upcoming high-end smartphones.

At the gathering, Samsung took the wraps off a dual-screen device that looks like a standard smartphone when folded and sports a modest 4.58-inch OLED touchscreen display. However, the smartphone grows into a 7.3-inch tablet when the OLED panel is fully unfolded.

“Is your app ready for foldable phones?” said Park Ji-sun, Samsung’s senior engineer, adding that the “in-folding” type display has a pixel density of 420 dots per inch.

Other specs, such as those of the battery, and the exact date of the launch, were not released.

Moreover, the 7.3-inch screen is able to split into three zones at the same time, allowing users to use Internet, multimedia and messages simultaneously.

“The cover display is slightly smaller than displays of recent smartphones on the market, but all of the applications can be used just like on the main display,” Park stressed.

Senior Vice President Justin Denison said the company developed a new kind of adhesive for its display that allows for reduced thickness even when folded.

The new interface places interactive controls in the bottom half of the display screen, making it possible for users to reach and touch objects with a thumb while using their smartphones with one hand.

Samsung said One UI is designed to minimize and relieve stress on human hands, with the focus on putting relevant content in useful places, mostly on the bottom, to improve both readability and accessibility.

One UI is to be used with the new Galaxy S9 and other devices, and set to launch in a beta form this month in several countries, including the United States and South Korea, ahead of the public launch in 2019.

Samsung earlier said that it wishes to become the first in the world to release an operational foldable smartphone, raising the possibility that it may showcase the first product in the near future.

The reveal by the world’s largest producer of smartphones comes as global rivals, such as U.S. Apple Inc. and China’s Huawei, have been making similar preparations to release foldable smartphones.