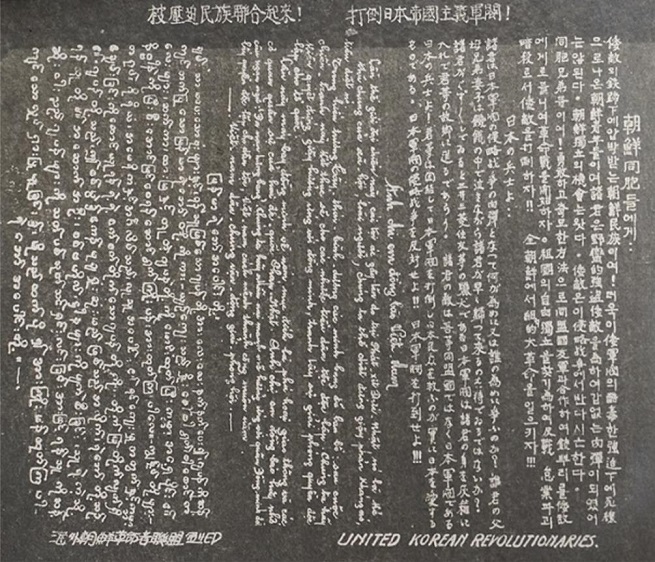 This image, provided by the Ministry of Patriots and Veterans Affairs, shows a document that a group of Korea’s independence fighters wrote in 1942 to call for psychological warfare against Japan.

SEOUL, March 29 (Korea Bizwire) — South Korea’s patriots ministry has discovered an old document showing the country’s independence fighters had made a proposal to the United States for staging psychological warfare against Japan during World War II, its officials said Tuesday.

In the five-page document written in October 1942, a group of the activists called on the U.S. and its allies to use “paper bombs” — leaflets aimed at cementing unity among the allies and making Japanese troops realize the cruelty of Tokyo’s then militarism, according to the Ministry of Patriots and Veterans Affairs.

Consisting of China-based activists against Japan’s 1910-45 colonial rule, the group sent the document to Rhee Syngman, then a key member of Korea’s provisional government in charge of diplomacy with the U.S.

In December, the ministry found the document at the Center for Korean Studies at the University of Hawaii. It is part of a dossier that George McAfee McCune, a late American scholar of Korea and former State Department official, donated to the university.

McCune is the son of George Shannon McCune, an American missionary to whom the South Korean government awarded the Order of Merit for National Foundation in 1963 for his contribution to Korea’s fight against Japan’s colonization.

“Given the fact that the document was found from the dossier of McCune, a former State Department official specializing in Korea, chances are high that it was delivered to the U.S. government,” the ministry said in a press release.

The document includes a letter requesting the use of “paper bombs” and anti-Japan propaganda materials written in Korean, Japanese, Vietnamese and Myanmarese languages, according to the ministry.