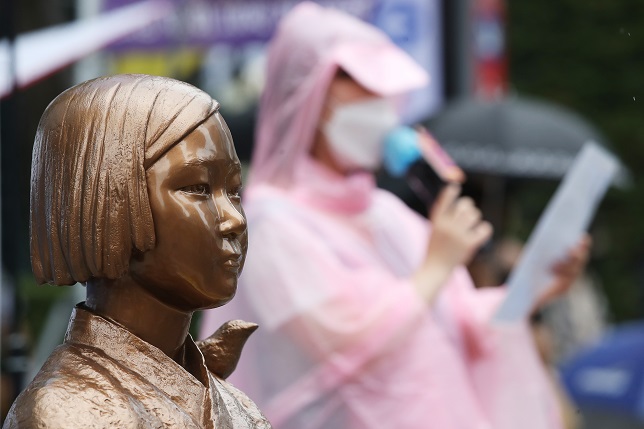 A participant speaks during a protest rally in front of the former site of the Japanese Embassy in Seoul on Aug. 25, 2021, next to a statue symbolizing young Korean girls sexually enslaved by the imperial Japanese army during World War II. (Yonhap)

SEOUL, Aug. 28 (Korea Bizwire) — A group of ruling party lawmakers have withdrawn a controversial bill designed to curb slander of former wartime sexual slavery victims and their advocacy groups, in the face of strong criticism from opposition parties.

According to a National Assembly website tracking legislative bills, the proposal to revise the act on protecting so-called comfort women was withdrawn on Wednesday after its submission 12 days ago.

“Comfort women” is a euphemistic term for those who were sexually enslaved by the imperial Japanese army during World War II.

Jointly proposed by nine lawmakers from the Democratic Party (DP) and former DP member Rep. Youn Mee-hyang on Aug. 13, the proposed bill sought to prohibit through legislation defamation against not only the former wartime sexual slavery victims and their families but also civic organizations working for them.

The bill, however, immediately came under heat from opposition lawmakers and critics who warned that the participation of Youn, former leader of comfort women advocacy group Korean Council for Justice and Remembrance for the Issues of Military Sexual Slavery by Japan, as the bill’s co-sponsor, would constitute a conflict of interest.

Opponents, in particular, branded the bill as Youn’s attempt to “protect herself” at a time when the lawmaker is facing a trial on charges of misappropriating donated funds while leading the civic group.

Lee Yong-soo, one of the surviving victims, has also come forward to publicly denounce the bill.

As controversy grew over the law proposal, the DP distanced itself from the bill, saying it was independently pushed by some party lawmakers on their own right, not by the party.

“The bill was meant to protect victims, but (we) decided to withdraw it in consideration of resistance from (some) victims,” said DP Rep. In Jae-keun, one of the bill’s co-proposers. “For now, we have no plan to propose it again.”