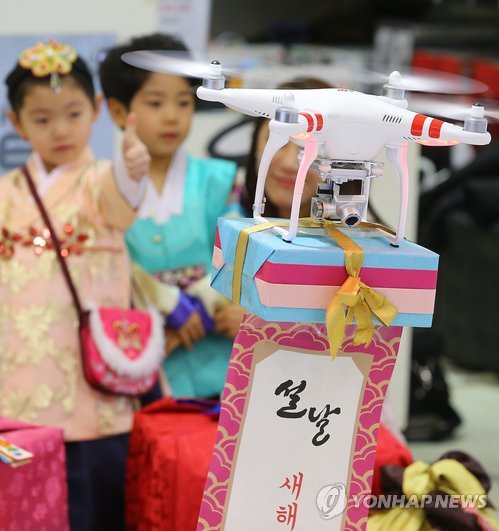 IPark Mall introduced the parcel-delivering drone to their customers as a pilot event prior to Seollal. (image: Yonhap)

SEOUL, Feb. 10 (Korea Bizwire) – On February 7, Wang Feng, the Chinese rockstar, proposed to his girlfriend, Chinese actress Zhang Ziyi at her birthday party, which was held two days before her actual birthday. In a unique twist, Wang did not hide his proposal ring somewhere or get down on one knee. Instead, a drone carried the huge diamond ring to Zhang, who happily received the ring and accepted his proposal.

Unmanned aerial vehicles (UAVs), commonly known as drones, are developed mainly for military purposes such as delivering bombs to dangerous operation areas or making reconnaissance flights over enemy camps. Now, they are being mobilized in various aspects of our lives, not only to carry proposal rings, but also to deliver packages and parcels.

The day before Wang’s proposal, there was a test flight of a parcel-delivering drone at the IPark Mall in Yongsan, central Seoul. The drone picked up a parcel and flew through the mall’s hallways for about 10 minutes before landing at its designated destination.

IPark Mall introduced the parcel-delivering drone to their customers as a pilot event prior to Seollal, lunar New Year’s Day in Korea, which falls on February 19. An official at the mall said, “As customers’ interest in drones increases, we prepared the event to show how a drone can deliver a parcel. We will run the demonstration until the Seollal holiday.”

“Later, we can use the drone to deliver lifebelts during emergency situations at our mall’s swimming pool, which will open this summer,” he added.

Although many have shown a keen interest in drones, currently they are not able to deliver real parcels to customers. More than anything else, parcel weight hinders drone operation. The drones used in IPark Mall’s testing have a maximum payload of 500g. Larger drones can carry heavier parcels, but at a significantly increased cost.

Meanwhile, drones will be mobilized for use in Korea’s agricultural sector. A drone model capable of spreading 10kg of agricultural chemicals or fertilizer is set to be introduced later this year.

Overseas, the commercialization of drone parcel services is active. DHL introduced its “parcelcopter” to deliver medicine to remote areas last September. Amazon is planning to offer a “prime air” drone parcel delivery service, although it has been delayed for the time being due to a lack of regulatory approval. In Singapore, a drone serving food will be operated later this year.