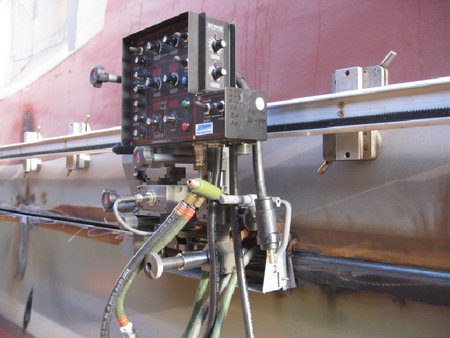 The business of shipbuilding involves a lot of horizontal welding in which welders work standing up or hanging on the rope.(image:DSME)

The business of shipbuilding involves a lot of horizontal welding in which welders work standing up or hanging on the rope. Since early 2012, the company has formed a task force to encompass staff members from eight divisions and the industrial technology R&D center as a way to improve the technology to weld faster and more effectively.

In December of the same year, Daewoo Shipbuilding succeeded in perfecting the technology to weld up to 80 percent of the whole 20-meter-long welding surface in one try, with the feature of automatically adjusting the welded joint’s margin of errors between 6 and 13 millimeters.

In the same month, the company won certifications for the technology from five classification societies including American Bureau of Shipping of the United States, Det Norske Veritas of Norway, Bureau Veritas of France, ClassNK of Japan, and Lloyd’s Register of the UK.

Starting this month, Daewoo Shipbuilding will put the pilot test-proven technology into practice in building a liquefied natural gas vessel at its dockyard. With the new technology, the company expects it will be able to save 50 percent of the time it takes to weld a ship from current three days while improving the defect ratio.