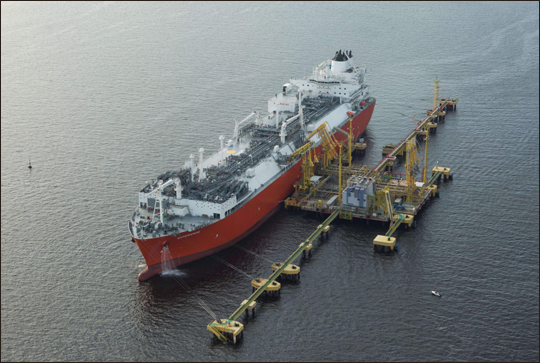 The facility, DSME’s first such vessel, is integrated with cutting-edge technologies on LNG storage and regasification. (image: DSME)

SEOUL, June 13 (Korea Bizwire) – A gas storage and regasification unit provided by Daewoo Shipbuilding and Marine Engineering (DSME) will support the power generation needed for the upcoming World Cup Games in Brazil by supplying natural gas from the offshore facilities.

DSME announced on June 11 that its LNG-FSRU*, or liquefied natural gas floating storage and regasification unit, which the Korean shipbuilder delivered to a U.S. energy company Excelerate Energy last April has successfully finished its trial run for full-fledged operation in Brazil.

※ A Floating Storage Regasification Unit (FSRU) is the vital component required while transiting and transferring Liquefied Natural Gas (LNG) through the oceanic channels. Thus, FSRU can be termed as a special type of ship which is used for LNG transfer. (Marine Insight)

The facility, DSME’s first such vessel, is integrated with cutting-edge technologies on LNG storage and regasification. Also, as it was built on DSME’s unique design platform of LNG-RV (regasification vessel), it can sail at the maximum speed of 18 knots and be used as an LNG-RV.

The LNG-FSRU will play a role of an offshore LNG terminal supplying natural gas to onshore power plants. It will receive natural gas produced in local gas fields for every third days through gas shuttle vessels.

It will be deployed to support electricity for the World Cup Games from June 13 and contribute to the electricity generation and supply the natural gas to Rio de Janeiro for the next 15 years.

Petrobras, the Brazilian state-run oil company, which chartered the vessel was satisfied with its world’s largest regasification capability and sent a letter to DSME thanking for solving the problems that occurred during the test run. For the test run, DSME dispatched several experts in design, R&D and test run at the spot.

An official at DSME said, “We are proud of the fact that the outcome of our long partnership with Excelerate Energy contributes to the world soccer festival. The facility proved that we are the strongest player in the world in LNG related market again.”

Meanwhile, so far DSME has delivered a total of eight LNG-RVs successfully and is now constructing another LNG-FSRU which will be the largest one with 263,000 cubic meters to be delivered in 2016.