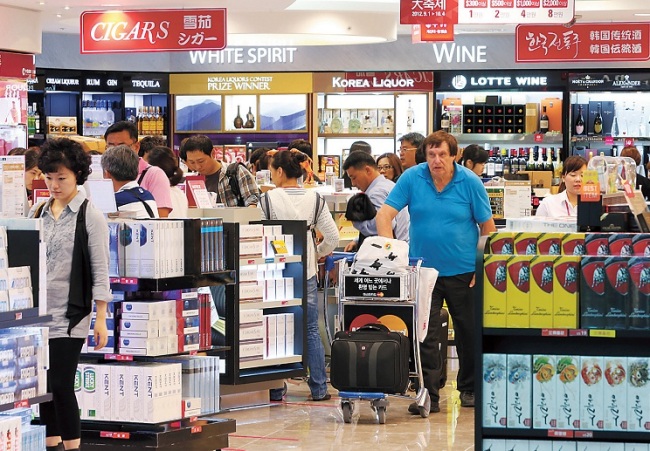 Last week, the Korea Duty Free Shops Association (KDFA) made an official request to the Korea Customs Service to postpone the opening dates of some of the newly built duty-free shops. (Image: Yonhap)

SEOUL, June 1 (Korea Bizwire) – Amid fears of further Chinese economic retaliation over the South Korean deployment of a THAAD missile defense system, duty-free stores that were scheduled to open soon are scrambling to postpone their opening date.

Last week, the Korea Duty Free Shops Association (KDFA) made an official request to the Korea Customs Service to postpone the opening dates of some of the newly built duty-free shops.

“Due to the THAAD row with China, the prospect of business uncertainty has grown immensely. As a result, we proposed to extend the time before new duty-free business operators including Shinsegae DF, Hyundai Department Store and Top City open their stores,” a KDFA official said.

Under the current rules, new duty-free business owners must open their stores within a year from the day they received business approval from the government, giving them only the rest of the year.

However, amid growing concerns and plummeting sales resulting from a lack of Chinese tourists, an increasing number of industry insiders are calling for the opening dates to be pushed back.

Industry experts believe duty-free stores have been among the biggest victims in the South Korean tourism industry after the Chinese government banned tour packages to its popular neighbor.

Against this backdrop, the Korea Customs Service plans to hold talks this month, during which the KDFA’s proposal to push back opening dates of new duty-free stores will be discussed.

Previously, the KDFA made public its willingness to be flexible with regards to the opening dates of new duty-free stores at the request of a business operator.

“If we postpone the opening dates of new duty-free stores until the market stabilizes, it’s also good for existing duty-free stores, and will help to create an environment where new business owners integrate with the incumbents,” an industry official said.

“(As a result), stock management expenses will also decrease, which could be a win-win situation for subcontractors,” the official added.