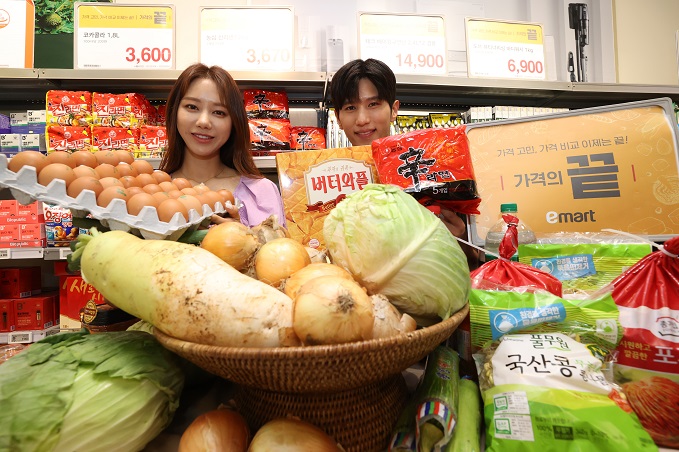 Models pose with groceries at the Seongsu branch of E-Mart in Seoul on July 4, 2022. (Yonhap)

SEOUL, July 5 (Korea Bizwire) — E-Mart Inc., the country’s biggest discount store chain, declared that it will continue to sell major daily necessities at the lowest price as part of efforts to attract more customers in the era of high inflation.

The company said Monday that it will select 40 different types of major daily necessities and sell flagship products in each group at the industry’s lowest price.

After comparing its selling prices of such items with those offered by its rivals such as Homeplus, Lotte Mart and Coupang on a daily basis, E-Mart will sell them at the lowest price through its offline outlets and its online mall SSG.com.

Accordingly, the overall prices of the items involved in the list of 40 major daily necessities will be slashed by 13 percent on average.

In addition, E-Mart will also select 500 different items on a weekly basis to keep their sales prices at the lowest level.

“We will expand our lowest price policy towards the end of this year. If high inflation is not addressed until then, we will extend the period further,” the company said.