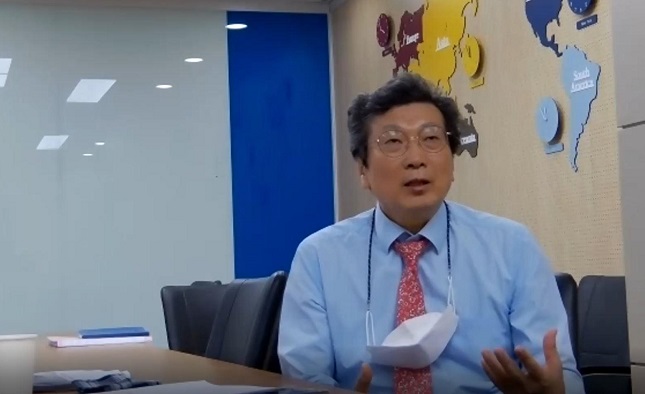 This photo taken on Oct. 22, 2021, shows Edison Motors Chairman Kang Young-kwon giving a briefing on the company’s plans to transform SsangYong Motor into an EV maker after its acquisition during an online press conference held in Edison’s Seoul office. (Yonhap)

SEOUL, Oct. 22 (Korea Bizwire) — Edison Motors Co., the likely preferred bidder for financially troubled SsangYong Motor Co., said Friday it aims to turn around SsangYong in three to five years by focusing on transforming it into an electric vehicle-focused carmaker.

On Wednesday, SsangYong and its court-appointed lead manager recommended a local consortium led by Edison Motors as the preferred bidder for the debt-laden carmaker.

The bankruptcy court is widely expected to approve the proposal.

“To achieve the aim, we are planning to resume full operations with three shifts (in SsangYong plants) to produce existing combustion-engine, battery-powered, and hybrid models in the coming years,” Edison Motors Chairman Kang Young-kwon said in an online press conference.

Under the three shift systems, SsangYong will be able to produce up to 300,000 vehicles a year on the three assembly lines of its plant in Pyeongtaek, south of Seoul, Kang said.

The No. 2 assembly line has been idle since February 2019 as SsangYong stopped producing the Chairman sedan and the Turismo SUV. The No. 1 and No. 3 assembly lines are in operation under one shift system.

As for financing plans, Edison said it will raise 1.5 trillion won (US$1.27 billion) from strategic and financial investors to take over SsangYong.

In follow-up steps, SsangYong and EY Hanyoung plan to sign a memorandum of understanding with the Edison consortium for the deal by the end of this month.

In November, the Edison consortium is scheduled to conduct a two-week due diligence on SsangYong and then sign a deal to acquire the SUV-focused carmaker. 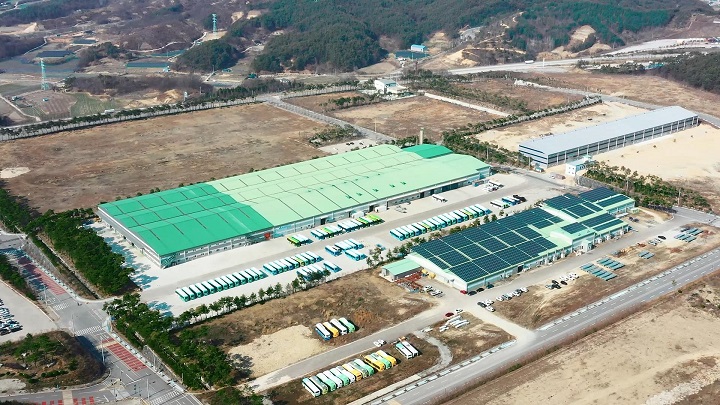 It is preparing to build production facilities in India, Europe and the United States in the long term.

SsangYong has suffered lackluster sales in recent years due to lack of new models and its Indian parent Mahindra & Mahindra Ltd.’s plan to make no cash injection into SsangYong.

From January to September, SsangYong’s sales fell 17 percent to 61,854 autos from 74,707 a year earlier. Its lineup consists of the Tivoli, Korando, Rexton and Rexton Sports SUVs.

In April, SsangYong was placed under court receivership for the second time after undergoing the same process a decade earlier. Mahindra failed to attract an investor due to the prolonged COVID-19 pandemic and its worsening financial status.

The company also plans to sell its current Pyeongtaek plant, in three to five years and build a new factory to focus on EVs in the same city. Its other plant in Changwon, 400 km south of Seoul, makes engines for its vehicles.