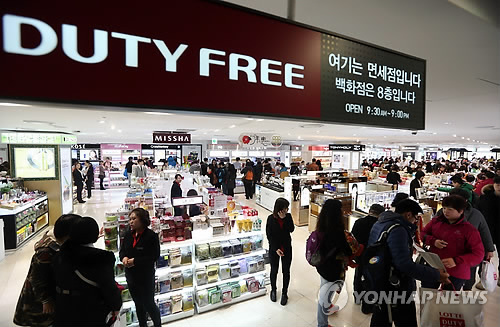 According to the Korean Customs Office, as of June 1, the closing date for the bidding, seven retail companies submitted proposals to open new duty-free stores in Seoul. (image: Yonhap)

SEOUL, June 2 (Korea Bizwire) – Eight Korean retail giants have thrown their hats into the ring in a bid to secure the rights to operate two new duty-free shops in Seoul. Duty-free businesses are considered to be geese that lay golden eggs.

Although there are seven bidders, as Hyundai Development Company and Hotel Shilla submitted a bid through their joint venture HDC Shilla Duty Free, all eight chaebol owners are participating in the cutthroat competition.

The customs office will pick two companies after the assessment, which is expected to take up to two months.

Meanwhile, in the competition for a duty-free store for small and medium sized businesses, 14 companies are crowded together, reflecting anemic consumer spending in the Korean retail industry. Among the bidders is Keyeast, a talent agency run by Hallyu star Bae Yong-joon that submitted a joint proposal with City Plus, which runs City Duty-free shops at Incheon and Cheongju airports.