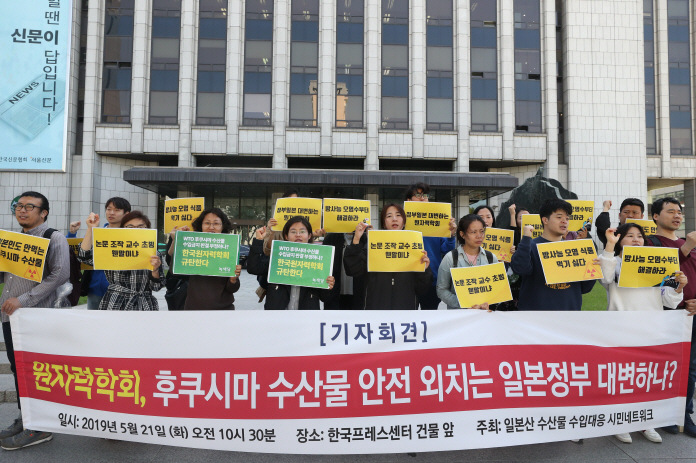 The civic group claimed that it was a legitimate right of citizens to refuse to eat any radioactive-contaminated marine products from Fukushima to protect their own health. (Yonhap)

SEOUL, May 21 (Korea Bizwire) — With the South Korean government’s import ban of Japanese fisheries products gaining the recognition of the World Trade Organization, the Korean Nuclear Society (KNS) has made an announcement that appears to represent the Japanese government’s position.

The KNS held a press conference at the Korea Press Center in Seoul on Tuesday.

During the press conference, the KNS reported that although Japan has been managing and controlling the possibility of radiation from spreading since the beginning of the Fukushima nuclear accident, many people in both Japan and South Korea are in fear of unnecessary radiation due to unscientific propaganda from anti-nuclear groups and some media.

The KNS also invited Ryugo Hayano, an honorary professor at the University of Tokyo, to the conference.

The professor told the press that after conducting radiation tests on agricultural and fisheries products cultivated around the accident site such as those used in school meals, authorities are not confident that the produce is safe.

The professor further claimed that after a year of internal exposure for 30,000 residents, no one had an effective dose of more than 1mSv, adding that the contamination level of food that Fukushima residents are actually eating was extremely low.

However, the professor introduced himself as “not an expert on nuclear energy” through academic data.

In front of the press center, civic groups including the Korea Radiation Watch for Occupational & Environmental Health held a press conference to criticize the KNS and its apparent pro-Japan position.

The civic group claimed that it was a legitimate right of citizens to refuse to eat any radioactive-contaminated marine products from Fukushima to protect their own health.

The group added that the KNS is labeling citizens and their rights as “unscientific” and unnecessary fomenting fear of radiation poisoning.