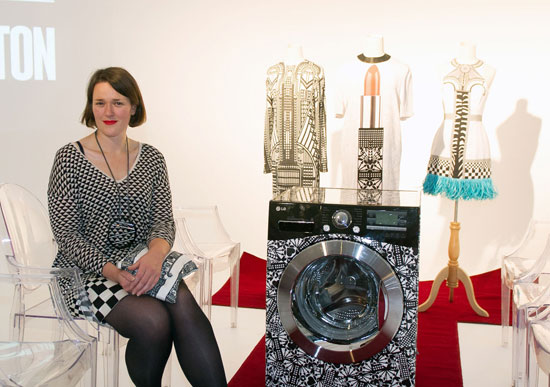 The Holly Fulton design washing machine by LG is also inspired by the designs of the celebrated fashion designer on its exterior.(image: LG Electronics)

SEOUL, Korea, Feb 4 (Korea Bizwire) – Home appliance makers are now competing based more on aesthetic quality than over technical superiority. For example, Samsung’s Zipel Food Showcase refrigerator (FS9000) has divided its cold storage into two parts–”In-case” and “Showcase”–so that users can store infrequently used items inside while putting items like milk and juice in the glass-walled Showcase.

Samsung’s new Eco-bubble Washing Machine is designed with a sapphire-blue door and a full-touch screen. By doing away with the complicated-looking instrument panel, the new model has adopted a simple-but-highly-functional 5-inch touch screen.

Meanwhile, the 870-liter Dios side-by-side refrigerator (R-T871EBRDL) is famous for encompassing design patterns of Karim Rashid, the internationally renowned interior architect. The Holly Fulton design washing machine by LG is also inspired by the designs of the celebrated fashion designer on its exterior.

The Galaxy Note 3 appeals to the user with its camera clicking sound, the feel imitating that of book page turning, and the pen touch as if one is writing with a pencil. Its plastic case feels like leather with the rim looks as if it was sown with needlework. LG Electronics’ smartphone G2, meanwhile, allows its user to “knock” twice on the screen to turn the device on or off.

An LG Electronics official said of the trend, “As the technological levels of home appliance makers are advanced enough and there is little room for differentiation, they began to focus more on design qualities to appeal to customers. This year will see more items employing high-art designs.”