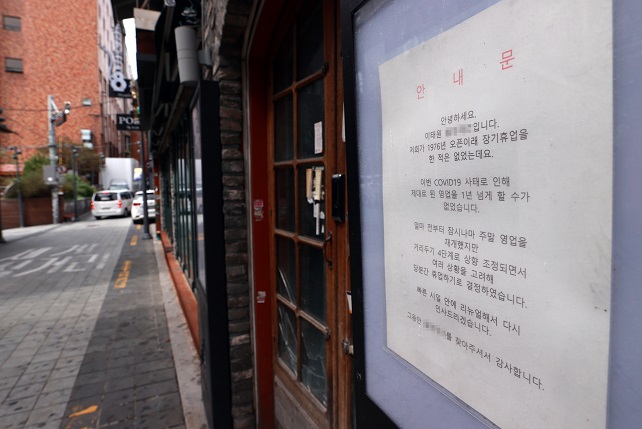 This Sept. 6, 2021, file photo shows a notice put up in the window of a restaurant in central Seoul that says it is temporarily halting business due to strict COVID-19 restrictions. (Yonhap)

The number of subscribers in the lodging and food service sectors stood at 648,000 in August, down by 19,000, or 2.8 percent, from the same month last year, according to the ministry’s monthly report on the labor market.

The drop is the biggest since March when the decrease was 34,000.

“The subscription rate mostly fell among restaurant workers due to restrictions on private gatherings and eating out imposed to contain the fourth wave of infections,” the ministry said.

Restaurants and cafes in the greater Seoul area have been subject to the toughest social distancing rules since July 12. Under the Level 4 rules, restaurants and cafes had to close before 9 p.m. and private gatherings of three or more people were banned after 6 p.m.

Earlier this month, the government decided to extend the scheme for one month but eased curfews on restaurants, cafes and bars, allowing them to operate until 10 p.m. until Oct. 3.

It also decided to allow gatherings of up to six in the capital area, though they should include at least two vaccinated people during the daytime and four after 6 p.m.

The transportation and taxi service sectors also lost 6,000 and 11,000 employment insurance subscribers in August, compared with a year ago.

By contrast, the number of subscribers in the medical and welfare; publication, communications and information; and science sectors rose by 115,000, 65,000 and 60,000, respectively, over the same period.

Those working in the manufacturing sector also jumped by 86,000, or 2.4 percent, to over 3.59 million, as the employment situation improved in most of the industries in manufacturing, including automobiles, machines and electronics, according to the report. 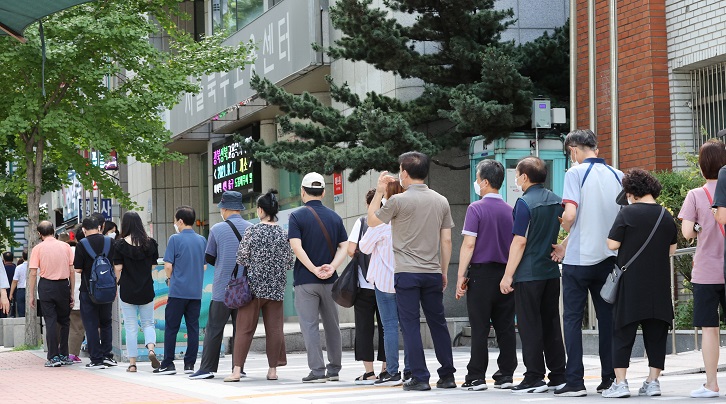 This Aug. 9, 2021, file photo shows people lined up in front of an employment center in northern Seoul to apply for unemployment benefits. (Yonhap)

The total number of workers covered under the employment insurance program was 14.4 million in August, up 417,000, or 3 percent, from a year ago.

It was the fifth consecutive month the figure increased by over 400,000, though it was smaller than the 485,000 tallied in July.

The number of subscribers increased in all age groups except for those in their 30s.

But the exceptional drop in 30-something subscribers is in line with a decrease in their population, and the overall subscription rate has been growing among young workers, the ministry explained.

“(The consistent increase) is the result of the government’s efforts to improve employment security, such as state-led job creation and hiring incentives for companies,” the ministry added.

The government, meanwhile, distributed more than 1.03 trillion won (US$884 million) of unemployment benefits in August, down by about 60 billion won, or 5.5 percent, from the same month last year.