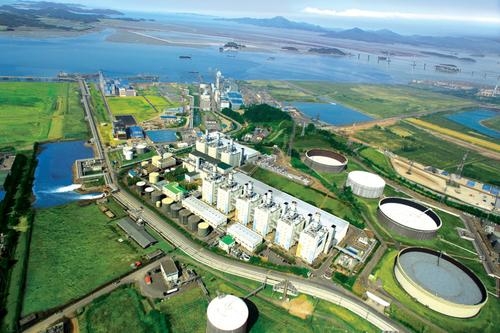 According to the Korea Power Exchange, POSCO Energy is currently the largest operator with the total capacity of 3,357 megawatts.(image:POSCO Energy)

SEOUL, June 9 (Korea Bizwire) – A competition to get bigger by gobbling up rivals in the energy industry is getting fiercer. As GS Group has closely caught up with the industry leader POSCO Energy by acquiring STX Energy, POSCO Energy responded by betting big on trying to take over Tongyang Power.

The power generation business, hitherto underserved by private-sector operators, has become more and more profitable business with a guaranteed stream of income for decades to come.

According to industry sources on June 6, POSCO Energy will complete its takeover of Tongyang Power, the operating company of a proposed thermal power plant in Samcheok, Gangwon Province, within this month.

Tongyang Cement, Tongyang Leisure, and Tongyang Corp., the stakeholders in Tongyang Power, selected POSCO Energy as the preferred bidder in the main bidding on the 5th.

In the deal to take over Tongyang Power, the SK Gas-Daewoo Engineering & Construction consortium and the Samtan-Daelim Industrial had competed with POSCO Energy. The two consortiums proposed the price of 300 billion won and 250 billion won, respectively, while POSCO Energy outbid them by making the highest offer of 400 billion won.

The reason POSCO Energy offered the price much higher than the market value of about 250-300 billion won may have to do with the fact that private power generation operators are engaging in a race to get themselves bigger.

According to the Korea Power Exchange, POSCO Energy is currently the largest operator with the total capacity of 3,357 megawatts, followed by GS Group with 2,323 megawatts (including 1,418 MW of GS EPS and 905 MW of GS Power), MPC Yulchon with 1,866 megawatts, and SK Group with 1,767 megawatts (994 MW of SK E&C and 773 MW of Pyeongtaek Energy Service).

The recent purchase of STX Energy (currently GS E&R) by GS Group has changed the industry landscape. The Bukpyeong Thermal Power Plant being built by GS Donghae Electric Power (formerly STX Electric Power), a subsidiary of STX Energy, will have a capacity of 1,190 megawatts. Once it is completed, GS Group’s total capacity will overtake that of POSCO Energy.

In addition, GS Group will have more than 5,000-megawatt capacity after the completion of a 105-megawatt biomass power plant and a liquefied natural gas-fueled combined cycle power plant (950 MW).

Threatened by the prospect of losing the No. 1 position, POSCO Energy stepped up its effort to acquire Tongyang Power, which has the license to build and run two coal-fired power plants in Samcheok whose combined capacity will be 2,000 megawatts.

The POSCO Group company expects to maintain its leading status by landing the Tongyang Power deal. In addition, if it can acquire other power plant assets including Dongbu Power’s Dangjin plant and Dongbu Steel’s Incheon plant, its status as the undisputed champion in the area of private-sector power generation would be firmly cemented.