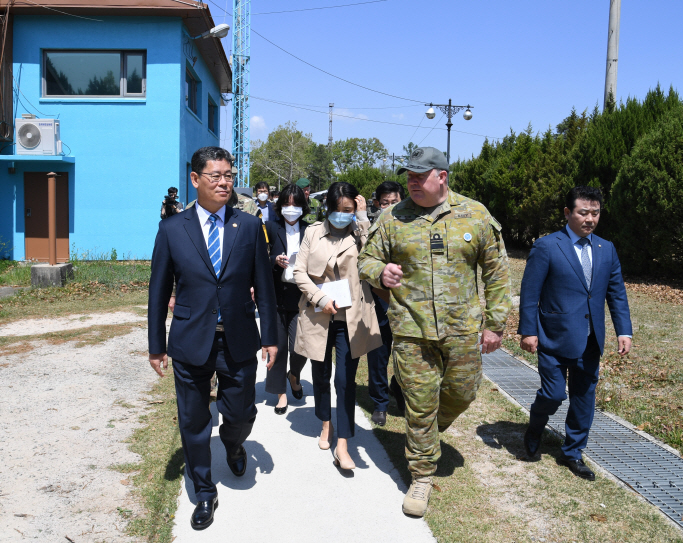 This photo provided by the Ministry of Unification shows Unification Minister Kim Yeon-chul(L) inspecting a tourist course near the Joint Security Area on May 6, 2020.

SEOUL, May 29 (Korea Bizwire) — The screening process required for South Koreans wishing to visit the truce village of Panmunjom on the border with North Korea has been shortened to three days, the unification ministry said Friday.

Since last year, the ministry has been coordinating with the United Nations Command (UNC), which controls access to the border area, to shorten the screening process amid criticism that a stricter standard is applied to South Koreans compared to the average of three days needed for foreigners.

“The UNC informed us yesterday, on May 28, that it has deleted its clause requiring (South Koreans) to apply at least 14 days prior to their visit, effective immediately,” Cho Hey-sil, the unification ministry’s deputy spokesperson, said in a press briefing.

“From now on, the screening process by the UNC for South Korean visitors to the Panmunjom is shortened from 14 days to 3 days,” she said.

The 14-day process for South Korean citizens was provided by the South Korean government as a requirement for more than a decade, the UNC earlier on its Twitter account.

Tours to the truce village of Panmunjom were halted in October due to the outbreak of African swine fever along the inter-Korean border.