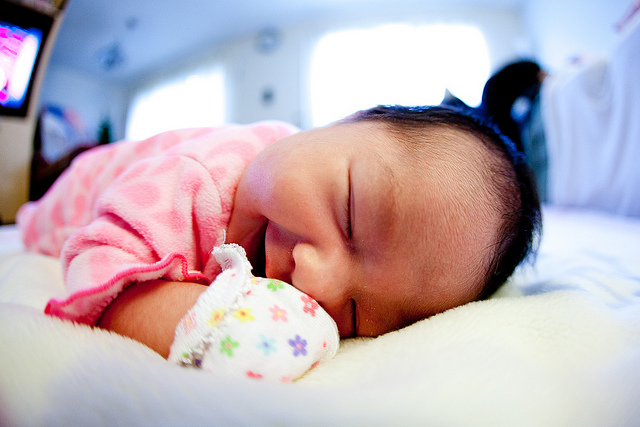 The problem of atopic dermatitis is much more acute for children and teenagers who account for 71.5 percent of all atopic patients. (image:robscomputer at flickr)

SEOUL, Korea, Nov 06 (Korea Bizwire) – The number of patients suffering from the condition of atopic dermatitis, a form of chronic inflammation of the skin with symptoms of severe itchiness, is on the rise rapidly. Believed to be caused by deteriorating air quality, it affects people of all age groups including small babies and children.

According to the National Health Insurance Service, the number of adult patients with atopic dermatitis over 20 years of age has grown to 3.09 million in 2008 from 1.72 million in 2002. The problem is much more acute for children and teenagers who account for 71.5 percent of all atopic patients. The percentage of those below ten years of age was 52.6 percent.

Up until now, the root cause of the disorder has not been found, although it is known that genetic correlation, immunity, and environmental factors such as dust, ticks, pollen, animal hair, air quality, or eating habit may have to do with the incidence of the condition. Especially, medical researchers said, those with weakened immunity are vulnerable to the skin disease as the body is unable to protect itself from attacks from outside.

Others also focus more on environmental factors as it is clearly established that those residing in urban areas are more susceptible to the skin rash than those living in the countryside. In addition, people under constant stress with unhealthy eating habits or those residing in standardized housing units are more likely to fall victim to the debilitating condition. In response, companies specializing in construction materials are coming up with new offerings that claim to relieve the symptoms.

For example, wallpaper or floor made of natural material was found to reduce the symptoms of atopic dermatitis substantially. A medical research team at Bundang Seoul National University Hospital reported that its observation on 24 atopic patients living in an apartment between May 2010 and April 2011 discovered that their symptoms have improved markedly after replacing the wallpaper and flooring with naturally-occurring materials. Based on four rounds of tests in four-week intervals, the researchers found that the 14 patients with the eczema area severity index lower than 3.0 (patients with less severe conditions) showed improvement in their symptoms with much less itchiness. 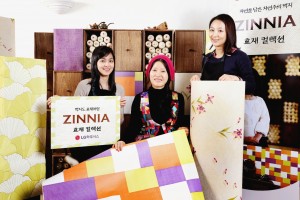 The Zinnia Hyo-jae Collection boasts superior texture and pattern designs, but what’s more notable is its functional feature of removing harmful chemicals in the air including the indoor total VOC and formaldehyde in newly built homes.(image:LG Hausys)

Recently Namuh Wallpaper has introduced a line of environmentally friendly wallpaper products claiming to protect human bodies from atopic conditions and other harmful elements. The company was given an award in the 2013 Korea Environment Awards for its wallpaper offerings. The company said its wallpapers are made of all-natural materials extracted from pine tree, Sitka cypress, juniper, green tea, and mugwort instead of the usual polyvinyl chloride (PVC). They can also eliminate volatile organic compounds (VOC) in the air through wood and mica powder inside the wallpaper.

LG Hausys has also launched a new wallpaper collection “Zinnia” in partnership with hanbok designer Lee Hyo-jae. The Zinnia Hyo-jae Collection boasts superior texture and pattern designs, but what’s more notable is its functional feature of removing harmful chemicals in the air including the indoor total VOC and formaldehyde in newly built homes. The Zinnia line won an HB Mark in April this year for its environmentally friendliness. Not to be outdone, Hansol Homedeco has begun marketing its “Hansol Cham-maru,” the high-density fiberboard material made of pine tree species indigenous to Korea (Pinus rigida). The flooring material is high in strength and resistant to moisture and temperature, ideal for Koreans’ living lifestyle using flooring heating. As it doesn’t require chemical-based glue to put them together, it can minimize atopic incidence as well. Recently Hansol Cham-maru won a KC (Korea Certification) mark. 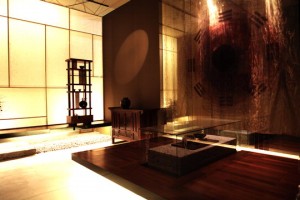 The lacquer used in the floors, capable of holding out from attacks by mold, moth larvae, and termites, is based on a material developed by a research team at Seoul National University. (image:Bonchil)

Bonchil, the company specializing in lacquered solid wood flooring materials, has shown off a new line of solid wood floors in the 2013 Atopic Care Expo held in July this year at the COEX Center in Seoul’s Gangnam. The lacquer used in the floors, capable of holding out from attacks by mold, moth larvae, and termites, is based on a material developed by a research team at Seoul National University.

Bonchil’s another brand Erom has attracted attention from the exposition visitors for its color solid wood floors that have atopic prevention properties as well as noise reduction with an added layer of rubber under the floor. At 2013 Atopic Care Expo, a company called Bonto showed off its all-natural beds made of dirt and mud. Unlike any other ostensibly all-natural bed products that combine dirt with cement and hardening agent, Bonto’s beds contain no artificial material except ginkgo wood and traditional paper made of mulberry tree bark, as well as dirt and mud.On average people spend 80 to 90 percent of their time indoors. That’s why we need to be watchful about what we have in the house, including wallpaper, floor, furniture, and everything else that we touch and breathe in. It is little wonder many companies are capitalizing on this trend as long as there are people suffering from skin problems and other maladies.