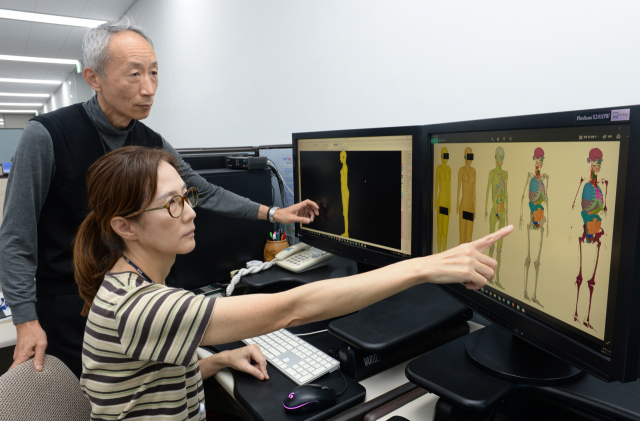 The program was modelled on videos of surgical dissection of the human body down to a single millimeter. (image: ETRI)

DAEJEON, Dec. 16 (Korea Bizwire) — The Electronics and Telecommunications Research Institute (ETRI) announced Tuesday that it has developed a virtual model of a human body to verify the risk of electromagnetic waves.

The models come both in male and female shapes, heads, and primate versions consisting of more than 100 varieties of organs and tissues.

The program was modelled on videos of surgical dissection of the human body down to a single millimeter.

The models come in 70 different structures based on the average value calculated through 30 indices that measure the bones that form the face and the head.

In addition, by using primate models composed of some 180 structures, researchers can observe behavioral changes that come about with absorption of the electromagnetic wave.

Previously, researchers had to rely on rodents to carry out experiments on how electromagnetic waves and radioactive rays affect living organisms.

This new development is expected to measure how electromagnetic waves emitted from electronic devices, transmission lines, and base stations affect the human body on a three-dimensional scale.