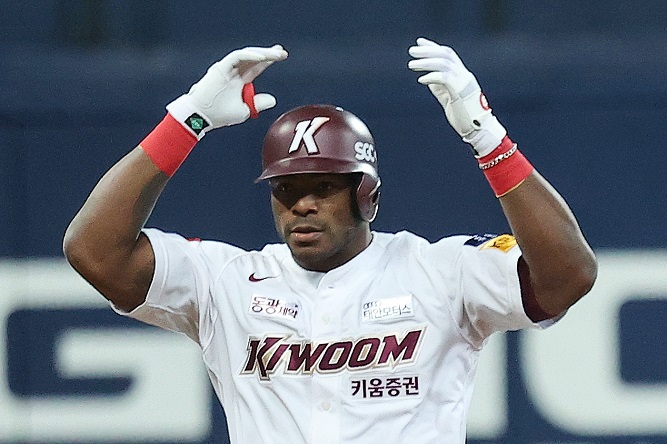 Yasiel Puig of the Kiwoom Heroes celebrates after hitting a double against the SSG Landers during the bottom of the sixth inning of Game 3 of the Korean Series at Gocheok Sky Dome in Seoul on Nov. 4, 2022. (Yonhap)

SEOUL, Nov. 5 (Korea Bizwire) — When Yasiel Puig is done playing baseball, he will likely look back on the year 2022, his first season in South Korea, as an important turning point — not only for his professional playing career but for his personal life.

On Thursday, Puig, a former National League All-Star with the Los Angeles Dodgers currently playing for the Kiwoom Heroes in Seoul, took to Twitter to open up about his mental health issues.

The Cuban outfielder noted that in his native country, it was considered weak for grown men to seek help.

But after arriving in the Korea Baseball Organization (KBO), Puig said he “got the treatments I needed” with the help of his agent, Lisette Carnet.

Then speaking to Korean media the following day, hours before a Korean Series game against the SSG Landers, Puig thanked his Heroes coaching staff and teammates for their support along the way.

“The baseball cultures in Korea and the United States are different. The Korean culture and the caring nature and patience (of the Korean people) have been a tremendous help for my growth,” Puig said through an interpreter.

“I’m especially grateful for how my hitting coaches, Kang Byung-sik and Oh Yoon, have been so dedicated and committed. I feel like I’m becoming a different person thanks to help from team officials and teammates.”

Puig arrived in Seoul with a reputation as a petulant teammate and an uncoachable player, with some tales from his Dodgers days to back up those labels.

But save for some early-season woes at the plate, Puig has not caused any trouble. Manager Hong Won-ki and members of his staff have been saying all season that Puig has been great to work with and they were never worried about his behavior at any point.

Asked why he was compelled to share his personal details on social media, Puig said, “I was just talking to my agent, and I suddenly felt a sense of gratitude toward my teammates and others.” 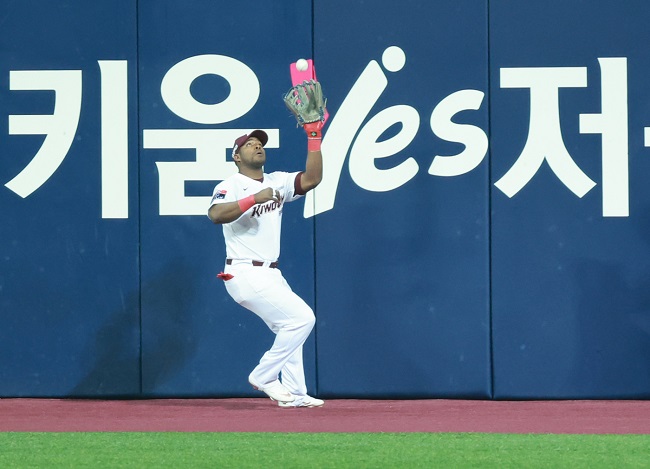 Kiwoom Heroes right fielder Yasiel Puig makes a catch on a line drive hit by Han Yoo-seom of the SSG Landers during the top of the eighth inning of Game 3 of the Korean Series at Gocheok Sky Dome in Seoul on Nov. 4, 2022. (Yonhap)

Whether those feelings will lead to another year in the KBO remains to be seen.

“Only God knows what will happen in the future,” Puig said. “My ultimate goal is to return to the majors. But if I don’t end up back in the United States, I plan on being back in South Korea.”

Puig was among the top hitters in the KBO in the second half and has maintained that form into the postseason.

Puig lost in the 2017 and 2018 World Series while with the Dodgers, and is now trying to win the Korean Series title with the underdog Heroes.

The Heroes trail 2-1 in the best-of-seven series after losing 8-2 Friday. Puig was one of few bright spots, as he hit two ringing doubles and made a couple of tough catches at the right field wall on defense.

“Everyone, from players to coaches, has come together as one. And we have been on the right path,” Puig said.

“Just because a team has a payroll, it doesn’t mean the team will play well. You have to really want to win. Our team and fans are dying to win our first title and the opportunity is right here.”