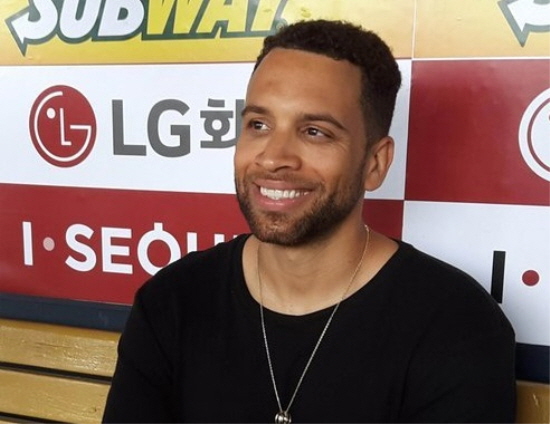 SEOUL, Jul. 18 (Korea Bizwire) — Having signed with a South Korean club, former major league first baseman James Loney said Tuesday he expects a lot out of himself in the new league and the new country.

The LG Twins in the Korea Baseball Organization (KBO) announced their signing of Loney earlier in the day. The 33-year-old will make US$350,000 the rest of the season.

The first round pick by the Los Angeles Dodgers in 2002 has 11 major league seasons under his belt, and his last big league season came with the New York Mets in 2016.

This year, Loney played in 18 Triple-A games in the Atlanta Braves and the Detroit Tigers systems, batting .218 with two RBIs. His last game was on May 20 and he was released by the Braves two days later.

Though his best days appear to be behind him, Loney said he feels he can still help a ball club in different ways.

“I think (the Twins) just expect me to play at a high level. That’s what I expect from myself,” Loney told reporters at Jamsil Stadium in Seoul, where the Twins were preparing to host the KT Wiz to start the second half of the season. He’d arrived in South Korea in the early hours of Tuesday.

Asked if he feels ready to play right away despite a near two-month absence from live action, Loney said, ” I feel like it. I feel good now.”

“I’ve been taking ground balls, hitting, running and working out, the same stuff that I’d normally be doing,” the player added.

Loney played six and a half seasons for the Dodgers after getting drafted, and was traded to the Boston Red Sox during the 2012 season.

Loney then signed with the Tampa Bay Rays as a free agent before the 2013 season, and stayed there through 2015 before a one-year stint with the Mets.

Loney said he decided to come to South Korea because he was drawn to “the competition level” of the KBO. Though he knew about the league here in general, Loney said he didn’t actively seek any advice from other foreign players who’ve been here before because “I was just hoping to see it on my own.”

On the Twins’ roster, Loney is replacing third baseman Luis Jimenez who was batting .276 with seven homers and 30 RBIs in 51 games before suffering an ankle injury on June 2.

The Twins had been hoping he’d return to action by late July but decided to go in a new direction in the second half.

Loney said he could step in and fill Jimenez’s void, calling himself “a solid all-around player who can impact the game.”

“I take a lot of pride in defense as well as hitting,” he said. “I am going to do whatever I can to help the team win a game, with base running, a big hit or a defensive play.”

At the All-Star break, the Twins were at 41-40-1 (wins-losses-ties), good for sixth place among 10 teams and one game behind the Doosan Bears for the wild card spot.

The Twins are currently last in the KBO in home runs with 55. The league’s two best home run hitters, Choi Jeong and Han Dong-min of the SK Wyverns, have combined for 57 long balls.

LG manager Yang Sang-moon said he was confident Loney could rely on his big league experience and make quick adjustments to the new league.

“He had almost 1,500 hits in the majors, and that means he’s faced and adjusted to all types of pitchers,” Yang said. “Even though he’s coming to our team in the middle of the season, we felt he wouldn’t have much trouble settling down here.”

Though Loney has never been a big power hitter — his career-high is 15 from 2007, his age-23 season — Yang said Loney could hit more than 15 long balls in a full season here.

“We thought highly of his eye at the plate, his ability to put the ball in play and his on-base skills,” the manager said.