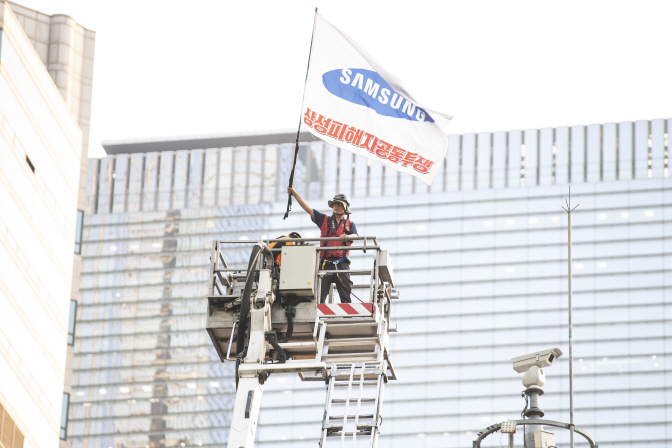 Kim Yong-hee, a fired Samsung worker, comes down from a 25-meter traffic camera tower in southern Seoul on May 29, 2020, after he ended a 355-day sit-in protest there against what he claims is unlawful dismissal over his labor union activity in 1995. (Yonhap)

SEOUL, May 29 (Korea Bizwire) — A fired worker of Samsung Group ended his nearly one-year protest atop a 25-meter tower in southern Seoul on Friday, after South Korea’s largest conglomerate apologized and promised to resolve what he claims to be his unlawful dismissal.

Kim Yong-hee, a former employee of the now-defunct Samsung Techwin Co., has been involved in a dispute with the group since he was fired in 1995.

He claimed he was illegally expelled for his activity to organize a labor union, which had been virtually banned by the family-controlled conglomerate until recently.

After 24 years of struggle demanding Samsung’s apology and his reinstatement, he climbed up a traffic surveillance tower on June 10, 2019, and continued a sit-in for 355 days.

Samsung Techwin, a defense equipment maker, was sold to Hanwha Group in 2015.

“The agreement was reached yesterday afternoon after a monthlong negotiation with Samsung from April 29,” Im Mi-ri, a professor who co-heads a group supporting Kim, told reporters after he came down from the tower near Gangnam Station in Seoul.

“Mr. Kim’s honor was restored as Samsung apologized for failing to resolve his midair sit-in early,” she added.

In a statement read by Im, Samsung acknowledged that it had failed to adequately put forth efforts to actively resolve Kim’s pain stemming from the conflict with the company since his dismissal.

“I have endured the time on top of the tower thinking of the people who have joined hands and visited Gangnam Station to show support,” Kim told reporters.

“I have nothing to wish any more if Samsung establishes a new relationship between the management and its workers through my protest,” the 61-year-old activist added.

Earlier this month, Samsung Group heir Lee Jae-yong made a rare public apology over various controversies over the management of the conglomerate and vowed to scrap the group’s “no labor union” policy.

The group later made an apology for failing to promptly settle the dispute with Kim. 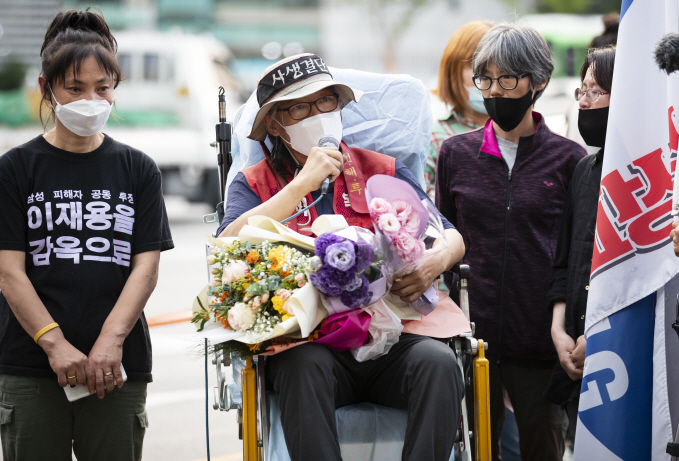 Kim Yong-hee (C), a fired Samsung worker, speaks to supporters after coming down from a 25-meter traffic camera tower in southern Seoul on May 29, 2020, ending a 355-day sit-in protest there against what he claims is unlawful dismissal over his labor union activity in 1995. (Yonhap)

The belated apology also came as Lee faces an investigation into a controversial merger between two Samsung units, Samsung C&T Corp. and Cheil Industries Inc., in 2015.

Lee was summoned by the prosecution Friday for the second time this week in the investigation.

Prosecutors suspect Samsung’s top management was involved in efforts to facilitate Lee’s managerial succession from his ailing father, Lee Kun-hee, and may have intentionally lowered the value of Samsung C&T prior to its merger with Cheil Industries to help benefit Lee Jae-yong.

He also faces a new trial in a bribery case in connection with a scandal that led to the ousting of former President Park Geun-hye.

He was initially sentenced to five years in prison in 2017 but was freed a year later after the Seoul High Court reduced the sentence to 2 1/2 years, suspended for four years, dismissing most of the bribery charges against him.

The Supreme Court last year sent the case back to the Seoul High Court for a retrial.