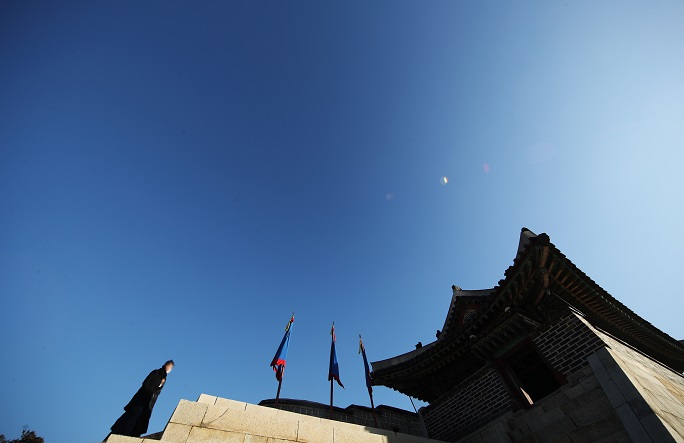 This file photo taken on Dec. 30, 2020, shows a clear winter sky over the Hwaseong Fortress in Suwon, south of Seoul. (Yonhap)

The Ministry of Environment said last month’s national average density of ultrafine dust particles was 24 micrograms per cubic meter, the lowest level for December since relevant record-keeping began in 2015.

Ultrafine particles smaller than 2.5 micrometers in diameter, known as PM 2.5, are a class one carcinogen.

Under the seasonal management system launched in 2019, the operations of dilapidated diesel vehicles, coal plants, construction sites and other large emitters of ultrafine dust are restricted, while roadside cleaning is strengthened and parking fees are increased at public car parks during the winter months.

Compared to a year ago, last month’s ultrafine dust density marked a reduction of 8 percent, the ministry said.

Compared with the three-year December average of 27 micrograms between 2017 and 2019, last month’s density was 11 percent lower, it added.

The ministry said the number of ultrafine dust “good” days totaled 10 last month, up four from a year ago, while the number of “bad” days was reduced by two to five.

Meanwhile, the nation’s annual average density of ultrafine dust particles was tallied at 19 micrograms per cubic meter in 2020, marking reductions of 17 percent from 2019 and 21 percent from the 2017-19 average, the ministry said.

Uljin, a coastal town in the southeastern province of North Gyeongsang, recorded the lowest yearly density of ultrafine dust last year, at 11 micrograms, whereas Asan in the central province of South Chungcheong and Bucheon on the western outskirts of Seoul shared the highest average density of 25 micrograms, the ministry noted.