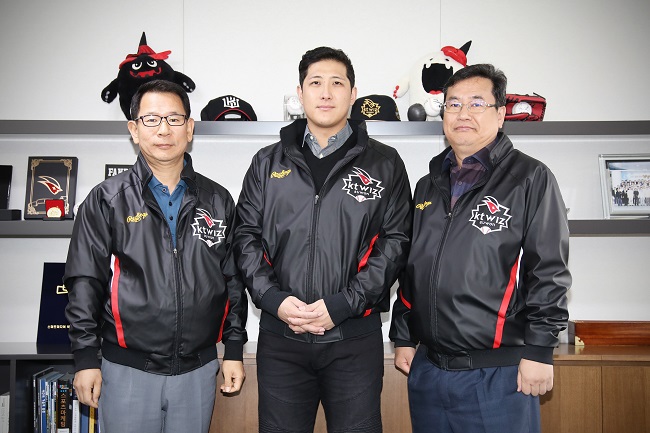 SEOUL, Nov. 13 (Yonhap) — Former San Francisco Giants infielder Hwang Jae-gyun has signed with a South Korean club, returning home after a cup of coffee in the majors this year.

The KT Wiz of the Korea Baseball Organization (KBO) announced on Monday they’ve acquired Hwang on a four-year deal worth 8.8 billion won (US$7.9 million), which includes a 4.4 billion won signing bonus.

The 30-year-old had two stints with the Giants in his first major league season. He homered in his very first big league game on June 28, but ended up batting just .167 in 13 games before getting demoted to Triple-A.

Hwang was called up six days later, but batted .125 in six games and was sent down again.

In 18 games with the Giants overall, Hwang had a .154 batting average with a home run and five RBIs.

He signed a one-year split contract with San Francisco in January and got an invitation to spring training. He made a quick impression by leading the Giants with 15 RBIs in spring training while batting .333 with five home runs in 27 games.

But the former KBO All-Star had to wait until midseason to get his first crack at the big leagues, and wasn’t able to capitalize on his opportunity when he finally got it.

Hwang returned to South Korea before the end of the major league postseason and had indicated to U.S. media that he’d return to the KBO for the 2018 season. He quickly became one of the hotly pursued free agents in South Korea, and was actually rumored to have signed with the Wiz for more than 10 billion won last month.

Hwang provides an immediate boost to an anemic offense that ranked last in runs scored and second to last in home runs in 2017. The Wiz, an expansion franchise that joined the KBO in 2015, have finished last in each of their first three seasons, winning 52, 53 and 50 games out of 144 games each.

“I’d like to thank KT for recognizing my value and offering me the deal,” Hwang said in the team’s statement. “I am excited to be returning to the KBO after one year away, and I also feel a huge sense of responsibility. I’ll try my best to help KT take the next step.”

The Wiz are based in Suwon, 46 kilometers south of Seoul, and Hwang made his KBO debut in the city with the now-defunct Hyundai Unicorns in 2007.

The Wiz general manager Lim Jong-taek said signing Hwang was a top priority for his club this offseason.

“He’s one of the KBO’s top-hitting infielders, and he’s just entering his prime,” Lim said. “We were on the same page, as far as our club’s vision for the future and Hwang’s drive for success, and it lead to the best result possible for both sides. We expect him to shore up his defense at third base and provide some punch in the heart of the order, and also set a good example for younger players.”

The Wiz said Hwang will be formally introduced as their new player on Nov. 27 at KT Wiz Park in Suwon.