SEOUL, April 23 (Korea Bizwire) — “1719 is a compilation of music and writings about events that happened during the darkest and cruelest three-year period of my life. If you don’t want gloomy stories, you’d better close the book.”

This is a warning Ha:tfelt, better known as Park Ye-eun from the band Wonder Girls, gives at the front page of her book, “1719,” which accompanies her new solo album with the same name.

With a subtitle, “About the moments that were left locked up,” the work is Park’s first full-length solo album. She adopted the stage name Ha:tfelt while doubling as Ye-eun of Wonder Girls.

The title refers to the years between 2017 and 2019, a time period during which she experienced the disbandment of Wonder Girls and the subsequent transfer from JYP Entertainment to another agency, Amoeba Culture, as well as her widely publicized feud with her estranged father.

“It was a time when there were a lot of changes to my life. … Having lived in pursuit of success, I was struck with skepticism and questions about why I need to live on. The album carries my struggle to fight, overcome or pass through those skepticism and questions. Now I think I am pretty much in control of my life,” Ha:tfelt said in a recent interview with Yonhap News Agency and other news outlets.

To give more background to the 14-track album’s composition, she also dropped a matching storybook that has 14 chapters corresponding to the music album’s playlist.

The new album and the book are on their way to hit the shelves Thursday evening.

“I learned that there are many people around me who had different but similar experiences as mine. Sharing our stories, I believe, helps us heal ourselves. I hope I could help them feel better through my music as well,” she said. 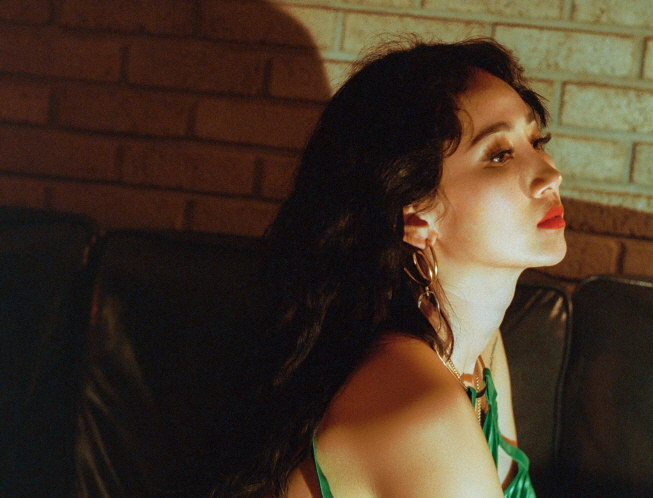 An image of Ha:tfelt, provided by Amoeba Culture

The full-length album, which took her three years to produce and release, is also meant to be self-treatment for the artist.

“I felt that I would be able to finally feel myself healed (with the music production) as if a piece of glass stuck inside me is finally taken out,” according to Park.

“Satellite,” one of the new album’s two lead singles, depicts an imaginary journey aboard a satellite toward a dream through the dimensions of time and space.

The other lead single, “Sweet Sensation,” is a hopeful song dealing with the sensation of a new morning after a sad night.

“For me, music is the only dream that I have pursued since I was very little. The reason I stick to music despite all the difficulties is basically I love it so much,” she said.

“I am thankful that music still makes my heart beat and never wears me out.”

To promote the new album, Park plans to appear on radio and TV shows and, over the long run, throw a concert possibly at the end of this year due to the current social distancing campaign over COVID-19.

Before the end of 2020, she also plans to release at least two new digital singles while venturing into collaboration works between music and other forms of art, such as literature, movie or exhibitions going forward, according to the artist.