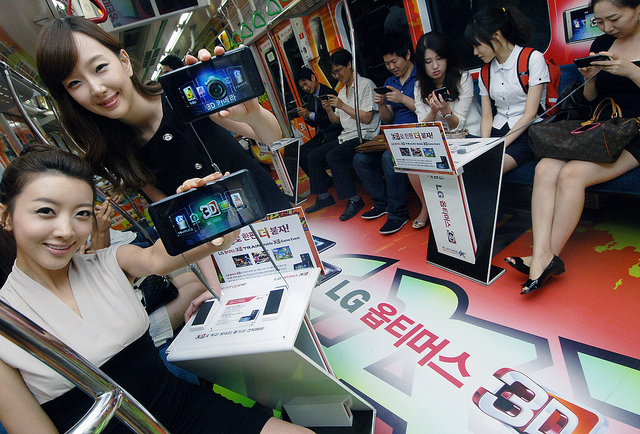 A variety of negative factors have contributed to the earnings shortfalls but the most prominent cause seems to be the increase in marketing costs. (image: LGEPR/flickr)

SEOUL, Korea, May 1, 2014 (Korea Bizwire) – Mobile telecommunications service providers reported disappointing earnings performances in the first quarter. A variety of negative factors have contributed to the earnings shortfalls but the most prominent cause seems to be the increase in marketing costs.

The competition in the mobile telecom market has been more intense than ever this year, and the exceptionally high marketing expenditure was an inevitable consequence not only for SK Telecom but also for its two competitors.

KT recorded a net loss of 40.9 billion won. The operating profit also dropped 58.6 percent to 152 billion won. KT, like the previous two mobile phone carriers, blamed the marketing cost for the loss. It spent 775.2 billion won for marketing in the first quarter, an 11.1 percent increase.

However, the mobile telecommunications companies are optimistic about the earnings in the second half. The market stabilization is known to be high on the government’s agenda and the industry somewhat seems to see the silver lining.

A SK Telecom executive said, “Although the possibility of some unexpected marketing moves after the second quarter can never be ruled out, the market would not be disturbed by the cutthroat competition of companies at least for a while considering their financial limits and the government policies.