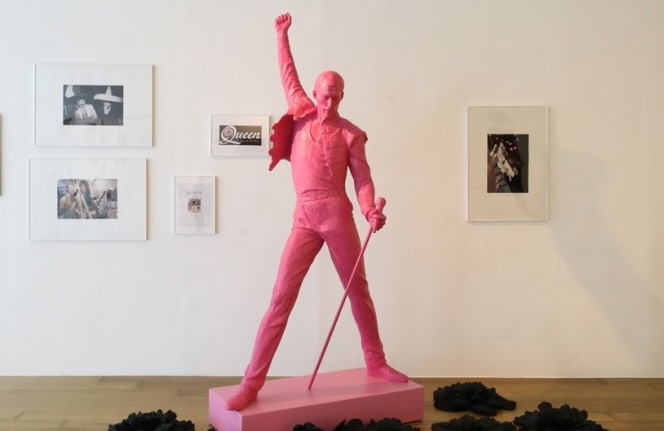 An art work of “Bohemian Rhapsody: The Queen Exhibition,” which kicks off on July 7, 2019, in central Seoul. (Yonhap)

SEOUL, Jul. 5 (Korea Bizwire) — A batch of stage costumes worn by iconic British band Queen and personal records of the band’s late frontman arrived in South Korea for their first exhibition here, alongside contemporary installations and video artworks inspired by its music.

The signature outfit of jeans, a white tank top and a studded belt Queen’s legendary frontman Freddie Mercury wore during the band’s 1985 Live Aid concert at London’s Wembley Stadium, were included in the collection that will be exhibited under the title “Bohemian Rhapsody: The Queen Exhibition.”

The exhibition is set to kick off on Sunday at Ara Art Center in central Seoul and runs till Oct. 6, hosted by Queen Production Ltd. and The Mercury Phoenix Trust.

Also on display are contemporary installations and video artworks inspired by the music of Queen and created by six young Korean artists and one British artist.

After the 2018 film “Bohemian Rhapsody” made a splash in South Korea, a group of Korean artists, including media artist Kim Hyeong-kyu, pitched the exhibition idea, which was accepted by Queen’s side.

The Queen biopic, which stars Rami Malek as Mercury, drew an audience of more than 9 million people in the country, where the 10 million mark is considered a huge success for films.

“Our expectations of the exhibition would be that everything brings the Queen music, imagery and (music) catalogue to a new audience,” Greg Brooks, a Queen archivist who jointly put together the exhibition, said in a press conference on Friday.

“The movie has already done that to an extent and Korean people greatly enjoyed the movie. We hope that that will continue and this exhibition will help in bringing in Queen’s not just greatest hits, best known songs, but also the entire catalogue,” he said.

The show earned a personal endorsement from Queen member Roger Taylor, who presented a photo of himself holding a paper with a celebratory message written in Korean.

The organizers are currently in discussion with a Japanese exhibition host for a possible Japanese leg of the show, Kim said, adding that the exhibition could travel to more countries down the road.