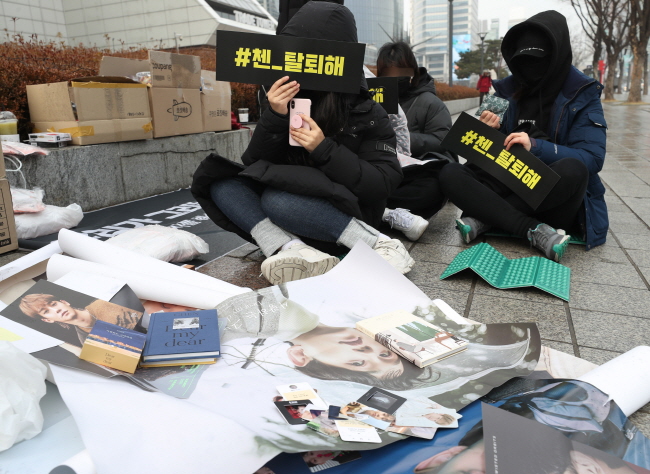 SEOUL, Jan. 21 (Korea Bizwire) — Some angry fans are stepping up their demand that boy band EXO’s vocalist Chen leave the team after the member made a surprise announcement last week that he will get married.

The 28-year-old singer, whose legal name is Kim Jong-dae, announced last week that he will soon get married to his girlfriend, who he implied is pregnant with a baby.

The news immediately led to a division among fans over the EXO membership of Chen.

Dozens of EXO fans staged a protest rally in front of SMTOWN in southern Seoul, an auditorium run by the band’s agency SM Entertainment, on Monday, pressing the music label to expel Chen from the group.

Last week, following the news of Chen’s marriage, a group of EXO fans issued a statement claiming that the marriage decision “inflicted serious damage to the reputation EXO has built up for nine years.”

They said if Chen remains in the band as a married man, it would have a negative impact on the image of EXO as an idol group as well as on its marketing.

The announcement came after Chen and SM said earlier that the artist will continue to work hard as an EXO member.

Other fans defended Chen’s decision, however, in respect of his private life, creating a heated debate on the issue on social networking services and in online communities.

Chen is the first to tie the knot among the nine members, and his fate in the band is likely to become a subject of debate over how much idol stars should sacrifice their private lives in return for dedication from fans.

Sungmin, a member of another popular SM boy band, Super Junior, has been excluded from the band’s activities since June last year after his surprise marriage to a musical actress in 2014 led to an angry reaction among same fans.