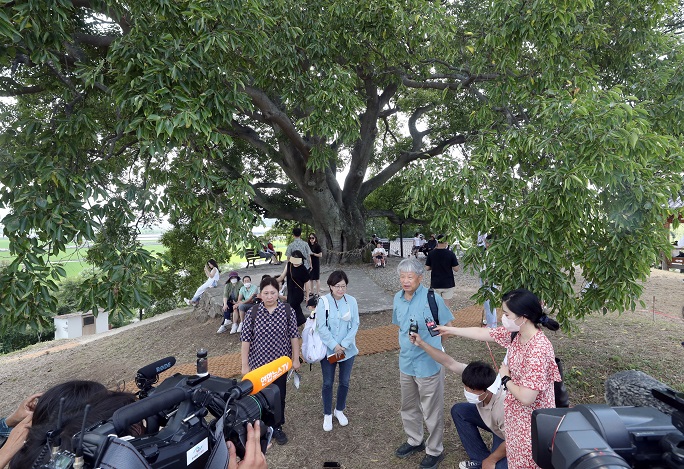 Chun Young-woo (R), chairman of the Cultural Heritage Committee, speaks to reporters during an inspection of a hackberry tree featured in the popular TV series “Extraordinary Attorney Woo” in Dongbu Village in the southern city of Changwon on July 29, 2022. (Yonhap)

SEOUL, July 30 (Korea Bizwire) — Heritage experts on Friday conducted an on-site inspection of an iconic hackberry tree featured in the popular TV series “Extraordinary Attorney Woo” to review whether it is valuable enough to be designated as a natural monument.

The tree, presumed to be 500 years old, is located on a hill in Dongbu Village in the southern city of Changwon.

It has gained public interest since it appeared in last week’s episodes 7 and 8 of the legal drama, which revolves around an ingenious rookie lawyer with autism spectrum disorder.

Experts from the Cultural Heritage Administration (CHA) examined the tree for about 40 minutes and held a meeting with residents for about an hour.

“I would like to thank the villagers who have protected the natural heritage, and the writer of the drama,” he added.

In the drama, lawyer Woo and her colleagues fight against the local government’s plan to construct a road that would cut through a fictional village. They won the case by having the tree designated as a natural monument.

The tree is 16 meters high and 6.8 meters in circumference and has a crown spread of 27 meters.