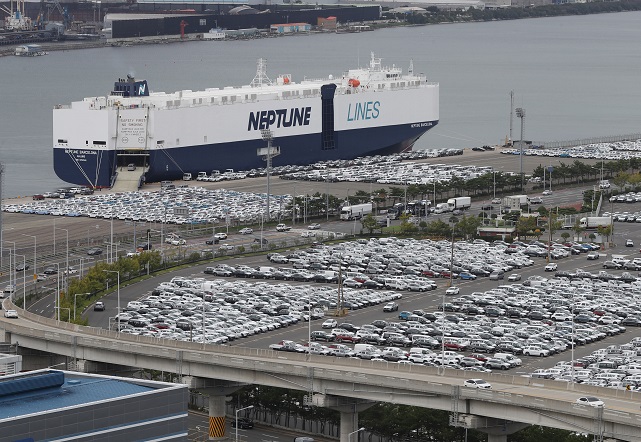 This file photo taken Aug. 29, 2022, shows a port in Ulsan, 307 kilometers southeast of Seoul, packed with cars set to be exported. (Yonhap)

SEOUL, Oct. 31 (Korea Bizwire) – Exports of passenger cars advanced 30.1 percent in the third quarter of the year from a year earlier, data showed Monday, on the back of growing demand for eco-friendly vehicles.

Carmakers here shipped passenger cars worth a combined US$12.6 billion during the July-September period, up from $9.7 billion a year earlier, according to the data compiled by the Korea Customs Service.

By destination, exports to the United States jumped 58 percent on-year in the third quarter, with those to Canada and Australia also moving up 35.6 percent and 34.1 percent, respectively.

The average price of cars shipped came to $21,273 during the cited period, up 2.6 percent on-year.

Eco-friendly cars, such as electric vehicles, accounted for a record high of $4 billion of the exports in the third quarter, up 42.3 percent on-year.