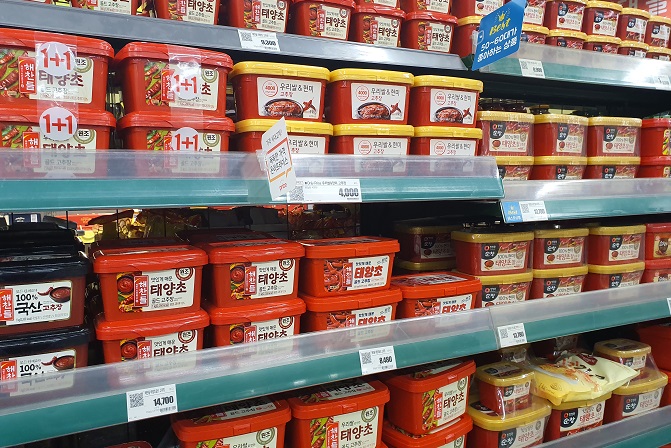 In the file photo, red pepper paste products are displayed at a supermarket in Seoul. (Yonhap)

Overseas shipments of red pepper paste, called “gochujang” in Korean, came to US$50.93 million last year, up 35.2 percent from a year earlier, according to the data by the Korea Agro-Fisheries & Food Trade Corp.

South Korean exports had been on the rise since 2016, when the figure stood at $31.33 million.

The United States was the top export market with a share of 26.5 percent, followed by China with 17.3 percent and Japan with 10.3 percent.

Exports to Southeast Asia spiked last year from 2019, with shipments to Thailand and the Philippines shooting up 113.2 percent and 55.8 percent, respectively.

Meanwhile, domestic sales of red pepper paste rose slightly in the first half of last year amid the coronavirus outbreak, snapping a three-year losing streak.

Local consumption of the spicy sauce amounted to 118.2 billion won ($107 million) in the January-June period of 2020, up 6.2 percent from a year earlier, according to the data.