“The central and local governments are focusing on disinfection and preventive measures while blaming the avian flu on migratory birds. However, the fact is that infectious diseases such as avian flu cannot be prevented without any improvement in their breeding environment enhancing their welfare. The governments just ignore the fact.”

“Milder forms of bird flu exist in Korea 365 days a year, and the Animal and Plant Quarantine Agency confirmed that there were 450 cases of low pathogenic avian influenzas in 2013 at its forecast examination on breeding poultry. Factory farms, which lack generic diversity with poor breeding environment contaminated by germs and viruses, exacerbate the health conditions and immune systems of chickens and ducks, leading easy conversion of low pathogenic AIs into highly pathogenic ones.” 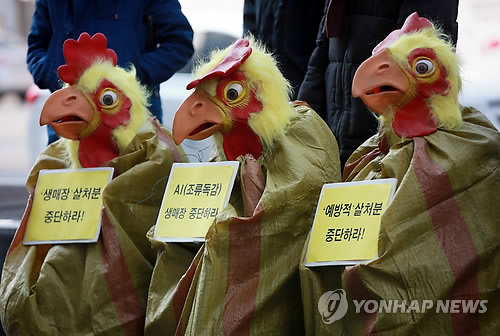 Members of the Korea Association for Animal Protection stage a performance asking for a halt to bird culling measures at exit 9 of Hongik Univ. subway station on January 11. They asked the government to stop burying the animals alive, and to consider their welfare. (image: Yonhap)

SEOUL, Jan. 12 (Korea Bizwire) – As the avian flu is spreading, the issue of the government’s “preventive cull” – typically by burying the birds alive, is gaining attention. The issue is whether it can be an effective method to prevent the disease, or if policymakers are overlooking the fundamental causes of the disease.

Choe Jae-chun, director of the National Institute of Ecology and distinguished professor of Ecoscience at Ewha Womans University, once questioned the government’s automatic reflex to cull animals in a preventive measure.

Professor Choe said that migratory birds and resident birds have lived together with different strains of influenza for tens of thousands years, and that it’s normal that some birds died of the disease. “In the wild, avian flu does not cause any problems. However, strains of influenza that are harmless to wild birds can kill poultry at factory farms,” he added

According to a survey on livestock in the fourth quarter of 2014 released by Statistics Korea on January 9, the number of ducks being raised in Korea fell by 658,000 or eight percent to 7,539,000 over the previous quarter. More importantly, there was a decrease of 30.8 percent over the same period of the previous year. The sudden decrease came from deaths due to culling, and delays in hatching baby ducks due to AI.

Professor Choe insists that the core of the issue is the variation. The population of wild birds consists of species with genetic diversity, so one or two infections would not spread widely. Only some of the population that lack immunity for the virus would die, while the others would survive.

However, the chickens we are raising undergo an artificial selection process to make them lay eggs well for a long time. Although they are not genetically cloned, they have poor genetic diversity at the level of cloned chickens.

While the outbreak of AI is inevitable, Choe said that increasing the genetic variation of poultry on farms could be an alternative measure in order to stop unconditional culls. Like wild birds, if the chickens have as many genetic variations, only the dying chickens would need to be removed from a farm instead of all of them. Genetic variation could guarantee the health of the whole population.

After the first Korean outbreak of AI in 2003, it has repeatedly come to Korea for the past 10 years, and over this period, some 50 million chickens and ducks have been culled. Now, AI is spreading nationwide to Chungcheong, Jeolla, Gyeongsang and Gyeonggi provinces, and becoming an endemic disease. 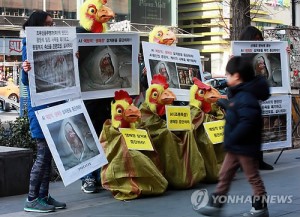 Members of the Korea Association for Animal Protection stage a performance asking for a halt to bird culling measures at exit 9 of Hongik Univ. subway station on January 11. They asked the government to stop burying the animals alive, and to consider their welfare.(image: Yonhap)

Currently, poultry breeding in Korea is conducted in factory farms with narrow cages. Numerous chickens live together on a farm, and it creates a “virus factory” with their wastes, filth, feathers and dust mixed together. As such, urgent changes are needed to form a healthy breeding environment based on animal welfare, to enhance their self-immunity and health by demolishing factory farms, and getting rid of the small cages.

The Korea Association for Animal Protection argues that it is a big problem for the government to bury living birds in bags in a move to prevent the spreading of the viruses. According to the Animal Protection Act and the Act on the Prevention of Contagious Animal Diseases, one must euthanize the chickens and ducks using painless methods such as CO2 gas. However, it is rare that these legal requirements are actually carried out by those responsible for the culls.