“Counterfeit goods are an inevitable part of economic development but are still like rotten apples. Time is needed to ultimately solve the problem. Counterfeits tend to be most rampant when an economy’s per-capital gross domestic product is at the US$5,000-level. China is going through such a phase that advanced economies like Europe and the United States have already gone through.” 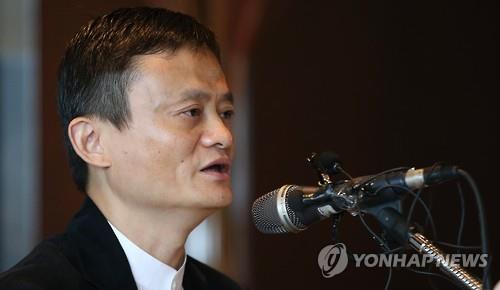 Jack Ma, founder and chairman of Alibaba.com, speaks in a press conference in Seoul on May 19, 2015. (image: Yonhap)

SEOUL, May 19 (Korea Bizwire) – Alibaba founder Jack Ma said Tuesday counterfeits are an “inevitable part” of economic development, a remark that comes as the Chinese e-commerce giant is facing claims over its alleged role in facilitating sales of fake luxury products.

Kering SA filed a lawsuit against Alibaba in the United States last week, accusing the e-commerce juggernaut of profiting from sales of knockoffs, which were shipped to New York, of its luxury brands, including Gucci and Yves Saint Laurent. The French firm had lodged a similar complaint last year.

While stressing that the Internet “does not create fakes,” Ma acknowledged the need to tackle the issue going forward and highlighted the company’s ongoing efforts to fend off counterfeits.

Still, he said that Kering should have opted for cooperation or other means to solve the issue rather than filing a lawsuit.

Regarding business opportunities in South Korea, Ma said his company is more interested in cooperating with local service providers rather than establishing a new business here.

He said he hopes to provide products and services to Chinese tourists visiting here through Tmall, Alibaba’s shopping platform in Seoul that merchandises South Korean agricultural and manufactured goods.

Ma also mentioned plans of launching “Koreapay,” a local version of its virtual payment system Alipay, through potential partners based in the country.